WASHINGTON (AFP) — US lawmakers investigating the January 6 attack on the US Capitol on Thursday detailed Donald Trump’s efforts to recruit the Justice Department into his scheme to overturn his defeat to Joe Biden — attempting to replace its head with a loyalist who was “meddling in the outcome of a presidential election.”

At the fifth hearing into its year-long probe of the January 2021 insurrection, the House of Representatives panel described Trump’s pressure on officials to amplify his false claims that his presidency had been stolen by widespread voter fraud.

Lawmakers revisited tensions among government attorneys in the days leading to the violence, when Trump tried to install his own man at the top of the department.

“It was a brazen attempt to use the Justice Department to advance the president’s personal political agenda,” Thompson said.

Underscoring the intensity of Trump’s pressure on the department, acting attorney general Jeffrey Rosen said that in late December 2020 and early January 2021, the president contacted him almost daily.

“At one point, he had raised the question of having a special counsel for election fraud…. he raised whether the Justice Department would file a lawsuit in the Supreme Court,” Rosen said. “At a couple of junctures, there were questions about making public statements or about holding a press conference.”

The Department of Justice pursued a deluge of Trump’s election fraud claims, but Rosen said officials were presented with no evidence.

Former US president Donald Trump speaks at a rally at the Delaware County Fairgrounds, April 23, 2022, in Delaware, Ohio, to endorse Republican candidates ahead of the Ohio primary on May 3. (AP Photo/Joe Maiorana)

Clark prepared a letter to the Georgia state assembly, the hearing was told, stating falsely that the department had found evidence of widespread voter fraud, but other officials refused to sign it. Other letters had also been prepared for other states.

Trump White House lawyer Eric Herschmann told the committee in a videotaped deposition that he had informed Clark that his plan would amount to “committing a felony.”

Trump pushed to install Clark as attorney general over Rosen, and have Clark reverse the department’s conclusion that there was no evidence of fraud that could sway the election.

But Trump was forced to back off by a rebellion in the department’s senior ranks at a January 4 Oval Office meeting outlined in detail by the witnesses.

Rosen, his deputy Richard Donoghue, another high-ranking official named Steven Engel and White House counsel Pat Cipollone threatened to resign en masse, warning that they would take “hundreds and hundreds” of top federal prosecutors with them if Trump went ahead with his plan.

“I made the point that Jeff Clark is not even competent to serve as the attorney general. He’s never been a criminal attorney. He’s never conducted a criminal investigation in his life,” Donoghue recalled telling Trump. 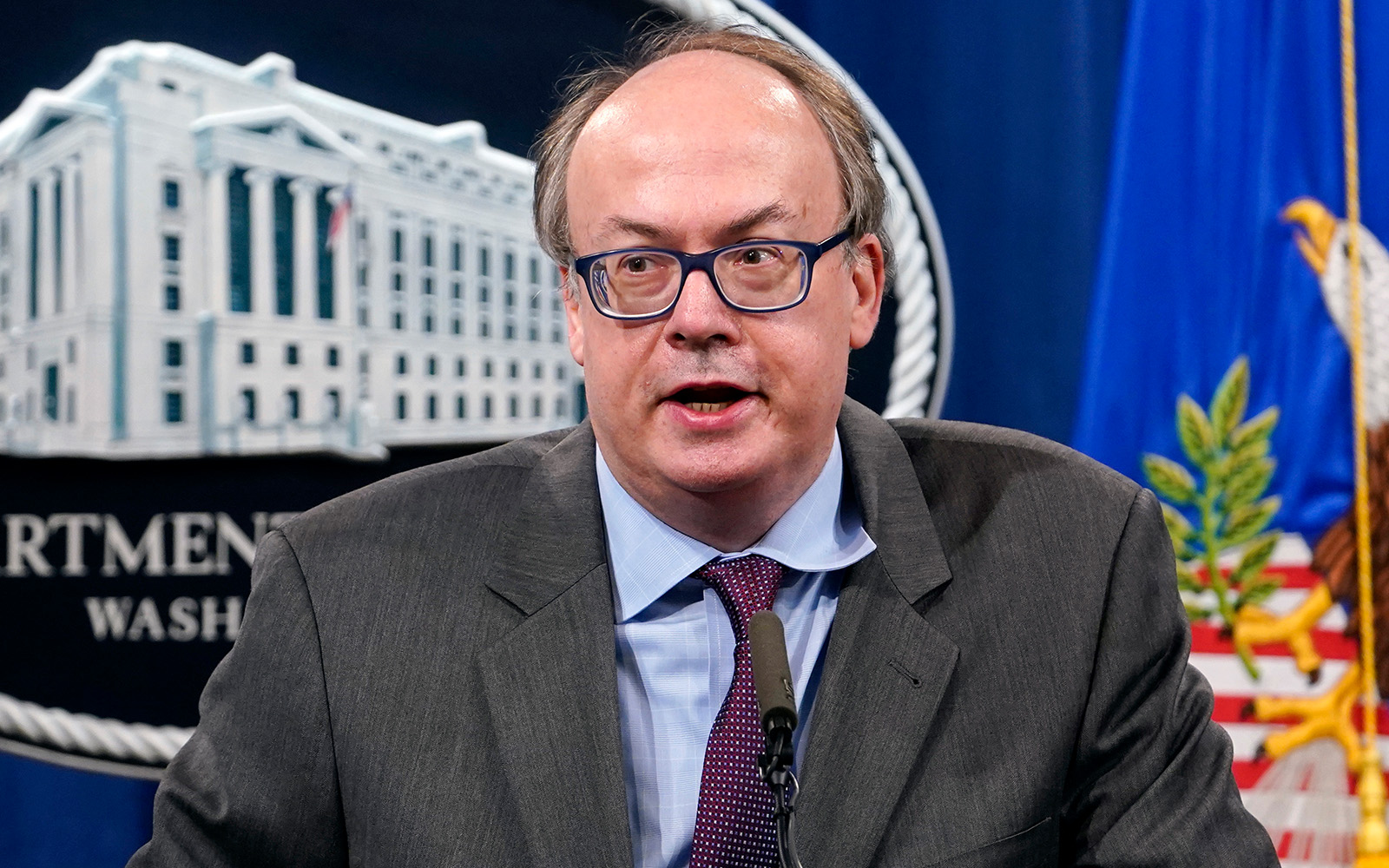 Jeffrey Clark, then-Assistant Attorney General for the Environment and Natural Resources Division, speaks during a news conference at the Justice Department in Washington, on September 14, 2020. (AP Photo/Susan Walsh, Pool, File)

Donoghue said he told Clark: “You’re an environmental lawyer. How about you go back to your office, and we’ll call you when there’s an oil spill?”

He also recalled warning Clark that his mission to push Trump’s election fraud claims was “nothing less than the United States Justice Department meddling in the outcome of a presidential election.”

Under live questioning, Donoghue confirmed that he had rebuffed Trump when the then-president insisted the department could simply “say that the election was corrupt” and “leave the rest to me.”

Rosen said Trump had asked him during a December 31 meeting to seize voting machines from state governments and again Rosen refused, explaining that there was no justification for doing so.

Donoghue recalled Trump being agitated and telling both officials he had been advised to fire them and promote Clark.

“I responded, as I think I had earlier… ‘Mr. President, you should have the leadership that you want, but understand the United States Justice Department functions on facts, evidence and law. And those are not going to change.’”

Clark didn’t appear before the committee and asserted his Fifth Amendment right to avoid incriminating himself more than 100 times during his deposition.

In a headline-grabbing coda to the affair, federal investigators searched Clark’s home on Wednesday.

The US attorney in Washington did not comment on the reason for the action but the Center for Renewing America, where Clark works, confirmed the search, calling it a “weaponization of government.”

Supporting The Times of Israel isn’t a transaction for an online service, like subscribing to Netflix. The ToI Community is for people like you who care about a common good: ensuring that balanced, responsible coverage of Israel continues to be available to millions across the world, for free.

Sure, we’ll remove all ads from your page and you’ll gain access to some amazing Community-only content. But your support gives you something more profound than that: the pride of joining something that really matters.


Join the Times of Israel Community