Shah Rukh Khan and Gauri Khan’s eldest son Aryan Khan is yet to make his Bollywood debut but is one of the most popular star kids and enjoys a massive fan following. Recently, he was clicked at the Mumbai airport as he returned from an undisclosed location. Looking uber cool in a navy T-shirt which he teamed with black cargo pants and white sneakers, Aryan greeted fans with a ‘salaam’ at the airport. He styled his outfit with a dual-toned yellow jacket.

Aryan also received a red rose from a fan at the airport and he later greeted the person with a salaam. Not just this, many of his fans wanted to click pictures with Aryan and he obliged. Many of his followers gushed over his dashing airport look. A fan wrote, “Just giving the Salaam like his Dad.” Another said, “I wish jab bhi 1st tym mumbai aau bus aryan ko dekh lu…” Take a look: 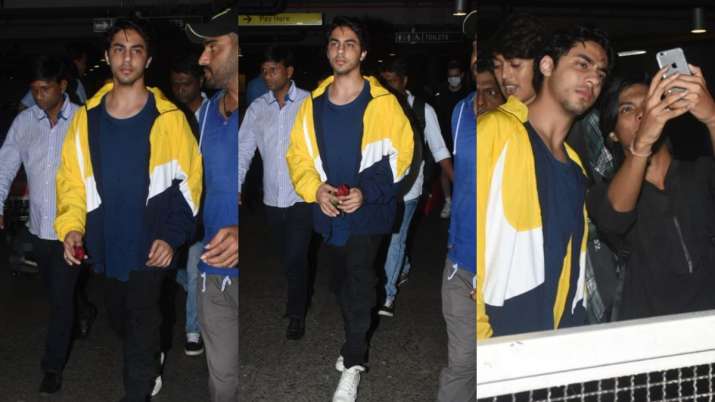 Recently, Shah Rukh Khan’s son made headlines for his photoshoot. Aryan Khan collaborated with a popular sportswear brand for his latest photoshoot and in the images, many are seeing the reflection of his superstar father in him. In the first image, Aryan can be seen half seated in a black outfit which he layered with a pink and black jacket. In the next image, the star kid is seen in a white T-shirt, trousers and a checkered shirt. In the third photo, he is seen balancing on his hand. He wore a grey gunji with a yellow jacket and black joggers. It is interesting to see that Aryan, despite being into modeling, is able to pull off poses like a pro.

As soon as Aryan shared his pictures on Instagram, fans flooded the comments section with comments appreciating the young one. He also received love from his parents SRK-Gauri Khan and even his younger sister Suhana Khan. The Bollywood superstar commented on his son’s pics, “Looking really good!!…and as they say, that whatever is silent in the father….speaks in the son. By the way, is that grey t-shirt mine.” ALSO READ: Shah Rukh Khan teases son Aryan with THIS throwback photo from Main Hoon Na after Gauri Khan’s tweet

Meanwhile, Aryan, who does not post very often on his Instagram handle, has recently become a little more active on the platform. Last month, he shared pictures with his siblings Suhana and AbRam Khan. With the post, Aryan ended his year-long hiatus on Instagram since he was arrested for the drugs-on-cruise case in October 2021. ALSO READ: Aryan Khan responds to Shah Rukh Khan’s ‘that t-shirt is mine’ remark with equal wit and humour

‘You Can Get Knocked Down, But You’ve Got to Get Up Again’: Mumbai Indians Head Coach Mark Boucher

Gold Filmmaker Alphonse Puthren Slams Critics Of His Film; Know What He Said