Dhanush turned 39 today i.e. July 28. Sara Ali Khan, who is known for her quirky yet interesting ways to engage her friends and fans on social media, shared a wish for her co-star in an ‘Atrangi’ style. The actress took to her Instagram stories and wished the south star with a BTS video from the sets of their 2021 film.

In the boomerang video, Sara, being Sara, is dancing in between the shoot, and Dhanush, the man known for his calmness, is patiently observing her with his hands on his hips.

Sharing the clip, Sara wrote: “Happy Birthday Dhanush, have the best day! As usual, I am over-enthusiastic and excited, while you are calm, poised and contained. Missing these Atrangi days.” She added the hashtag ‘BTS’. 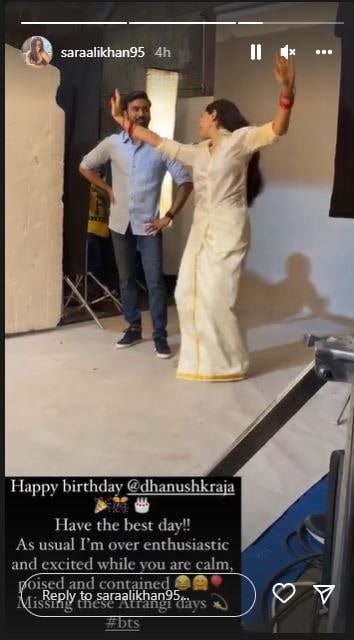 Earlier, the Love Aaj Kal actress congratulated Dhanush on his Hollywood debut The Gray Man. The flick has been released on OTT giant Netflix. After the actress watched the film at the special screening, she penned a special note for her “Vishu Babu.” Taking to her Instagram stories, Sara shared a photo of herself and Dhanush from the party hosted by Ritesh Sidhwani for the Russo brothers. She wrote in the caption, “Loved you in it as usual Dhanush, had a blast catching up with my Vishu Babu and thoroughly missed Aanand L Rai.”

Speaking about Dhanush and Sara, they both worked together in Aanand L Rai’s directorial Atrangi Re. The film also features Akshay Kumar. It has been loved by movie buffs and has garnered praise from critics.

Read all the Latest News and Breaking News here

Bangladesh fined for slow over-rate in second ODI against Zimbabwe