Around one in nine of the recent cases of coronavirus diagnosed in Israel were people who have previously recovered from an infection, according to a Friday report.

The Kan public broadcaster said 11 percent of cases confirmed over the past few days were reinfections.

There were no details given as to the percentage of those individuals who had been vaccinated in addition to having recovered from the virus, but the report said that a large proportion of them were at least partially inoculated.

Israel is currently seeing an unprecedented wave of infections driven by the Omicron variant.

Health officials believe the country could see around 100,000 new daily cases reported in the coming days, with the true number of infections in fact significantly higher due to changes in testing protocols.

Health Ministry data on Friday showed 40,430 new cases diagnosed in the previous 24 hours, a figure also believed by officials to be a significant undercount.

People shop at the Mahane Yehuda market in Jerusalem on January 13, 2022 (Olivier Fitoussi/Flash90)

The number of patients seriously ill with COVID-19 is climbing, reaching 306, up from 283 a day earlier. Of those patients, 86 were critically ill and 76 were on ventilators.

Israel is, however, reportedly seeing a slow rise in the number of seriously ill patients who need to be ventilated due to infection with the Omicron variant, compared to previous waves.

Though highly infectious, the Omicron strain now dominating the country is considered less virulent than previous variants, and Health Ministry figures show that the number of both seriously ill patients and deaths is lower than rates seen in the past.

Of the 319,572 virus tests carried out Thursday, 12.65% confirmed infection, the latest data showed, in a continuation of the high positive rate seen over the past week. There were close to 250,000 confirmed active COVID-19 patients overall across the country. 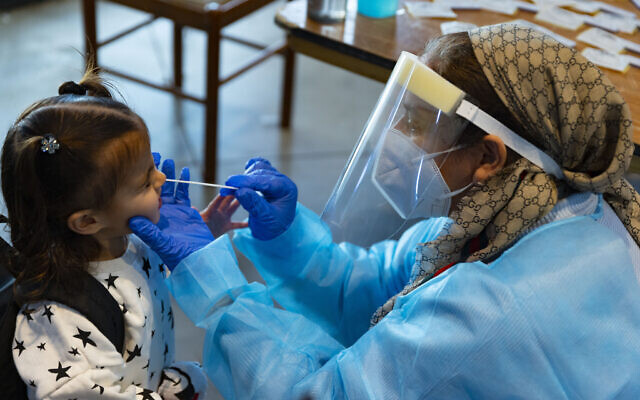 A health worker carries out a COVID-19 rapid antigen test in Jerusalem, on January 12, 2022 (Olivier Fitoussi/Flash90)

Nonetheless, infections drove 38,605 more people into isolation through exposure to a known virus carrier, bringing the total in quarantine due to exposure to 178,988 in addition to the 248,192 active patients.

On Thursday, new rules for quarantine began, shortening isolation for asymptomatic COVID patients from 10 days down to seven. But those still displaying symptoms throughout the full week will be required to keep isolating for a total of 10 days.

UP Elections 2022: Akhilesh Yadav in battle field from Mainpuri seat