Athiya Shetty was on cloud nine as her boyfriend and Team India vice-captain KL Rahul scored a half-century during the ongoing first T20I of the three-match series against Australia at PCA Stadium in Mohali. Rahul scored 55 runs off just 35 balls with the help of 4 fours and 3 sixes. The right-handed batter smashed three massive sixes as he tore into Australia’s bowling.

Taking to Instagram, Athiya shared KL Rahul’s picture and captioned it with a red heart emoji. 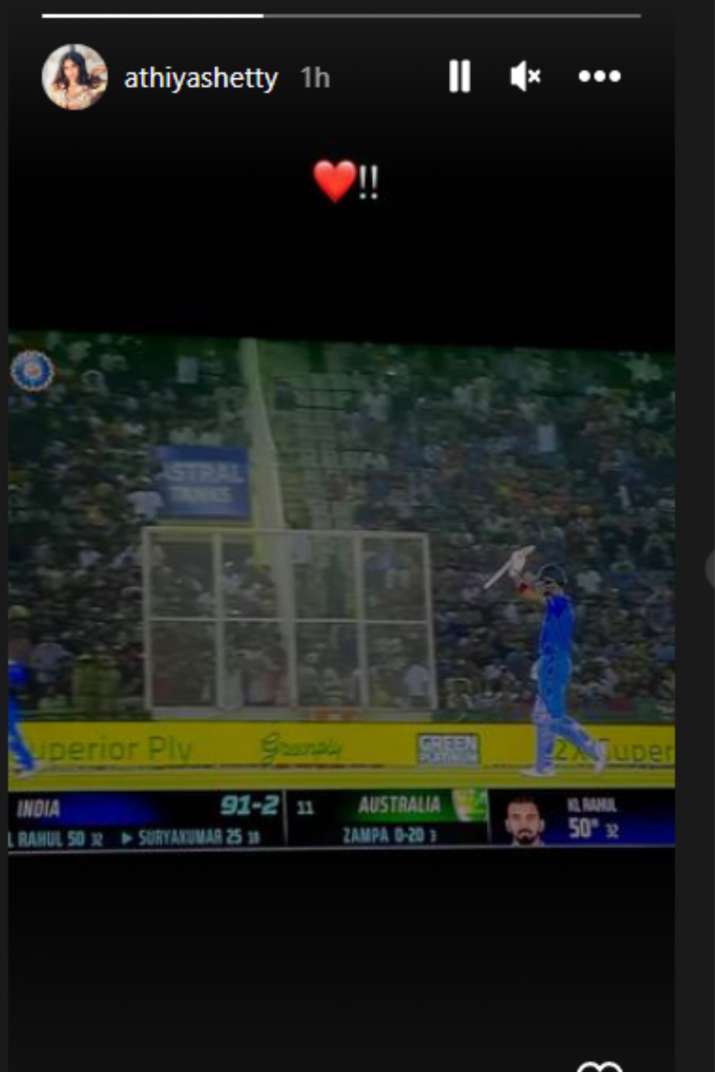 The batter was finally dismissed by Josh Hazlewood in the 12th over of the innings. Earlier, Australia captain Aaron Finch had won the toss and opted to bowl first. KL Rahul and Athiya have been dating for a while now and the actress was also seen with KL on a few tours of India.

Athiya Shetty and cricketer KL Rahul’s wedding has been the talk of the town ever since the actress’ father Suniel Shetty confirmed their marriage plans. During an interaction, Suniel Shetty said that ”as soon as the children decide, currently Rahul has various matches. He has the Asia Cup, World Cup, South African Tour, and Australia Tour lined up. When they get a break from work commitments, they will get married. They can’t marry in a single day. ” It was rumoured that the couple will be tying the knot at veteran actor’s Khandala bungalow, ‘Jahaan’.

Athiya Shetty and KL Rahul made their relationship public last year when the cricketer wished his lady love on her birthday with a cute social media post. Rahul even attended the premiere of Athiya’s brother, Ahan Shetty’s debut movie ‘Tadap’.

The two have been in a relationship for almost three years. They have been spotted at movie screenings, and parties. Athiya and Rahul also post pictures of each other on their social media.

On the work front, Athiya was last seen in ‘Motichoor Chaknachoor’ which was released in 2019.

Beating the Retreat Ceremony in a while: 29 classical tunes will be played, the biggest drone show in the history of the country