It was agony for Pakistan on Super Sunday. The Men in Green had every chance of beating India in the Asia Cup 2022 Group A match. But that wasn’t the case as India won the match by five wickets at the Dubai International Cricket Stadium.

Last year at the same venue in Dubai, Pakistan defeated India by 10 wickets in the T20 World Cup 2022. But they couldn’t quite replicate their performance on August 28.

After India won the toss and opted to field first, fortunes changed time and again. In the end, Hardik Pandya’s three-wicket haul and a timely knock of 33 off 17 sealed the deal for the Men in Blue.

Pakistan, in the meantime, had loads of chances to get the upper hand over India, but they kept letting India off the hook. India were too good a team to not take advantage of Pakistan’s missed opportunities.

Let’s take a look at the mistakes Pakistan could have avoided:

Babar Azam of Pakistan after getting out. Courtesy: AP

Right from the word go, Pakistan had their fair share of troubles while facing quality short-pitched bowling. After the match, former batter Salman Butt said that Pakistan’s ability to face short balls has persisted since Mickey Arthur’s stint as the head coach.

The likes of Khushdil Shah and Fakhar Zaman also failed to handle the well-directed bouncers from Indian bowlers. It’s pretty evident now that other teams would want to exploit Pakistan’s shortcomings. Shadab Khan is someone who takes his time, deals in singles and doubles before going for big shots. Even while playing for Islamabad United in the Pakistan Super League (PSL), he mostly bats in the top four and plays match-winning knocks.

However, against India, he came to bat at No.6 at a stage when Pakistan needed someone to play big shots right from the outset. Quite expectedly, he failed to perform.

In another surprising move, Iftikhar Ahmed was sent to bat at No.4 after the powerplay when Pakistan required a batter, who needed to graft and grind after the Men in Green lost Babar Azam and Fakhar Zaman.

Although Iftikhar scored in the high-20s, Pakistan could have made better utilisation of him and Shadab in the batting order. 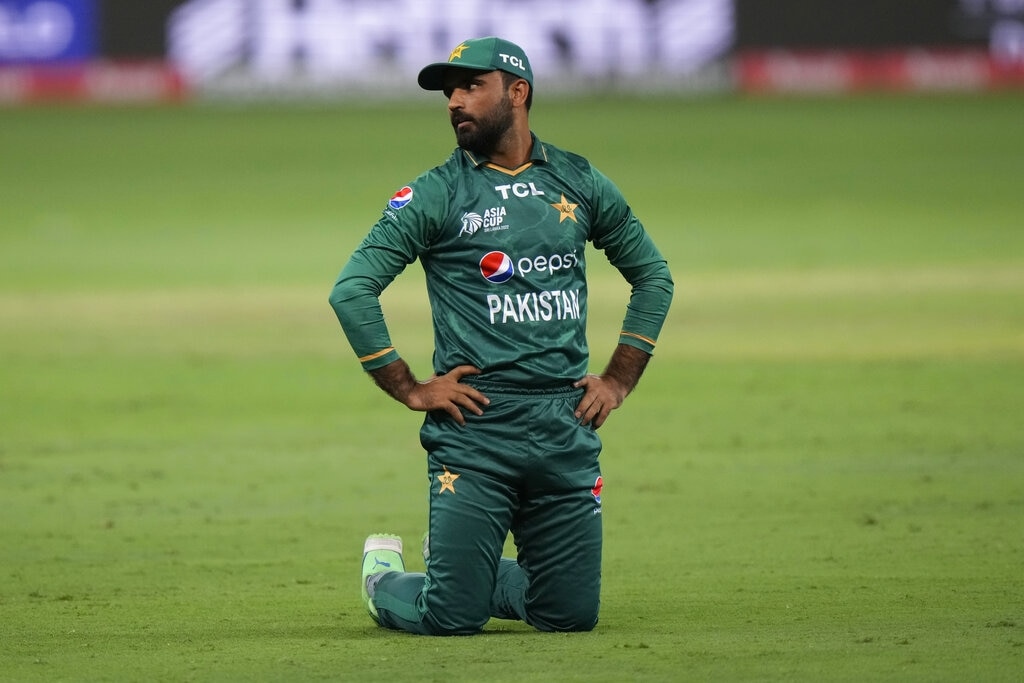 Back in 2017, Virat Kohli survived a scare off Mohammad Amir after being dropped in the slips. To his dismay, luck didn’t favour him for long as Amir accounted for his wicket soon after in the final of the Champions Trophy.

But this time around, the rub of the green went in Kohli’s way, although he couldn’t take a lot of advantage of the lifeline. In the fourth ball of India’s run-chase, Kohli chased one outside the off-stump with hard hands and found an outside edge.

However, Fakhar Zaman dropped him in the slips. India could have been two down had the catch been taken. Naseem Shah breathed fire and had already got the big wicket of KL Rahul.

Kohli, in the meantime, went on to score 35 runs off 34 balls with three fours and one six. He got out while trying to chip Mohammad Nawaz down the ground for a boundary and hit the ball straight down the throat of Iftikhar Ahmed. Pressure gets the better of even the best in the business, they say. Something similar happened during the dying stages of the match. When India needed 21 runs off 12 balls, Haris Rauf conceded two singles off the first two balls and made it even tougher for India.

On the third ball, Rauf caught Hardik Pandya off guard, but the latter somehow managed to cross the in-field. Babar Azam got himself into a good position to chase the ball down. However, instead of keeping the ball in play, he parried it over the ropes.

Although he tried to make amends, it was all too late. Hardik had already run three and he got one extra run after Babar’s misfielding in the crunch moment. 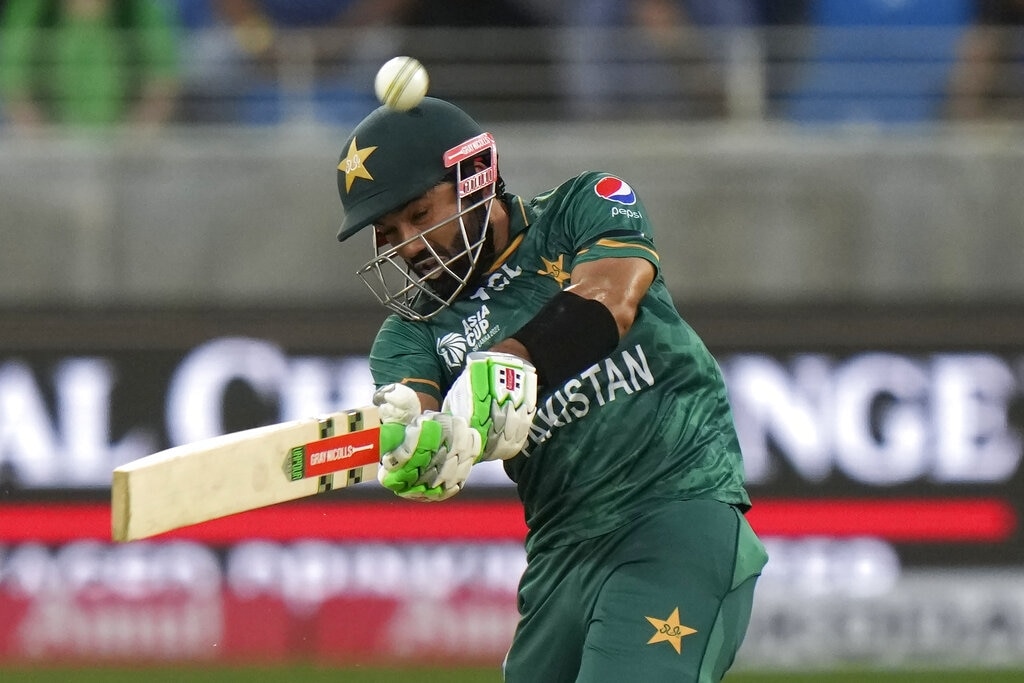 In a crunch game, it’s really necessary for the fielding side to save runs. However, Pakistan fielders lost their cool to some extent. Apart from Babar, wicketkeeper Mohammad Rizwan also wasn’t at his very best.

In the 16th and 17th overs from Shahnawaz Dahani and Haris Rauf, Pakistan conceded five wides. But three of those runs came after Rizwan fumbled behind the stumps. He failed to collect the ball cleanly and the Indian batters showed presence of mind to get extra runs.

In the end, the mishaps turned out to be costly for Pakistan as Rohit Sharma’s India won with two balls to spare in Dubai. 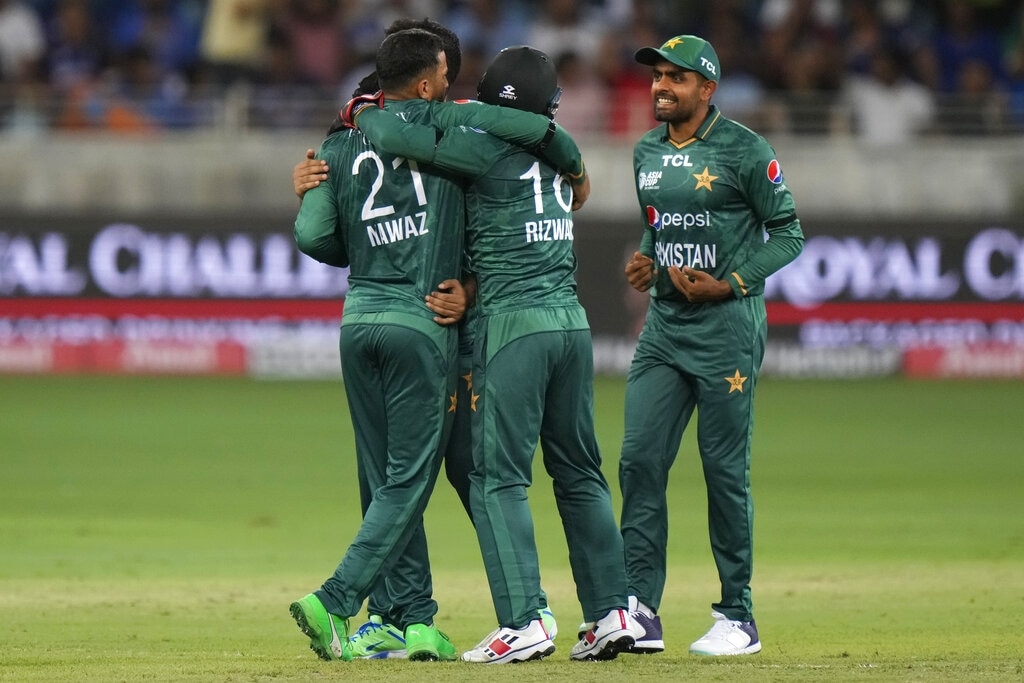 Mohammad Nawaz of Pakistan celebrates after picking up a wicket. Courtesy: AP

In the last seven overs, India needed 65 runs to win with Ravindra Jadeja and Suryakumar Yadav in the middle. Barring one over from Nawaz, the specialist spinners, also including Shadab Khan, had completed seven overs together.

From the 14th over onwards, Babar went all-out with his fast bowling trio of Dahani, Naseem and Rauf. The 27-year-old held Nawaz back. Mind you, Nawaz was once on a hat-trick after dismissing both Kohli and Rohit.

However, Babar decided not to use his full quota of overs early on. In the end, Nawaz had the daunting task of defending seven runs off the last over.

He started brilliantly after picking up Jadeja’s wicket, followed by a single and a dot ball. However, with a spinner bowling the last over, boundaries are pretty much inevitable unless and until one has the class of Sunil Narine or Rashid Khan.

Nawaz tried his best before eventually being hit down the ground for a six by Hardik Pandya. He speared the ball in, but Pandya was equal to the task and cleared long on with the utmost ease.

Till now these Bollywood stars are bachelors, one has decided to remain unmarried after being impressed by their character.

In search of ‘his’ tree in Israel, a Canadian filmmaker unearths unsettling issues