Agnipath Scheme Protest: A ‘Bharat Bandh’ call has been made by certain organisations for June 20 (Monday) as part of the ongoing protest against the new recruitment policy in the Indian armed forces. The protest which has been continuing for the past few days witnessed damage to government installations, railway stations, trains, and buses, among other public properties. Addressing the protesting youth of the country, and in order to clear the air over the new Agnipath scheme, the Defence Ministry on Sunday explained the policy in detail but ruled out any rollback of the scheme. The Army, Navy and the Air Force came out with a broad schedule of enrolment of soldiers under the new policy and asserted that it is the only way to bring down the age profile of the three services. Lt Gen Anil Puri, the Additional Secretary in the Department of Military Affairs, said at a tri-services press conference that anyone involved in protests, arson, and vandalism against the scheme would not qualify to join the three services under the new model.

Schools in Jharkhand will remain shut on Monday (today) in view of the bandh called over the Agnipath recruitment scheme, officials said. The ongoing examinations of classes 9 and 11 have also been postponed, they said. “In view of the bandh called by certain organisations, it has been decided that all government, as well as private schools, will remain closed on Monday,” School Education and Literacy Department secretary Rajesh Kumar Sharma said on Sunday.

“We do not want school students, especially those who travel by bus, to face any trouble. We have seen in Bihar that students were forced to get down from a bus as it was set ablaze,” he added. Fresh dates for the postponed exams will soon be announced, he said.

Prohibitory orders under section 144 of the CrPC have been imposed in the Jaipur police commissionerate area on Sunday in the wake of the protests against the Centre’s Agnipath scheme for soldiers’ recruitment for four years.

Ajaypal Lamba, Additional Commissioner of Jaipur Police, issued the orders to impose section 144 of the Code of Criminal Procedure (CrPC) from 6 pm on Sunday to midnight of August 18.

He said there is a possibility of disturbance to law and order due to the protests. All kinds of rallies, dharnas, demonstrations, and public meetings without prior permission will be banned, Lamba said.

Punjab ADGP, Law & Order has instructed all CPs & SSPs regarding handling protest against Agnipath scheme and Bharat Band call tomorrow, June 20. He has asked officials to monitor the activities of social media groups which are actively mobilizing or spreading instigating information about the scheme.

Lakhs of party workers to protest on Monday, says Congress

The Congress said lakhs of party workers across the country will hold peaceful protests on Monday against the “anti-youth” ‘Agnipath’ scheme and the Modi government’s “vendetta politics” in targeting Rahul Gandhi.

Union minister and former Army chief General V K Singh (retd) slammed the protesters saying if they don’t like the new policy for recruitment into the armed forces they shouldn’t opt for it.

Speaking to reporters on the sidelines of an event in Maharashtra’s Nagpur city, Singh said the Indian Army doesn’t conscript soldiers and that aspirants can join of their own volition.

“Joining the Army is voluntary and not a compulsion. If any aspirant wants to join, he can join as per his will, we don’t conscript soldiers. But if you don’t like this recruitment scheme (‘Agnipath’) then don’t come to (join). Who is asking you to come? You are burning buses and trains. Who told you that you will be recruited into the armed forces. You will be selected only if you fulfil the eligibility criteria,” he said.

Finding fault with even the best work of Modi govt: VK Singh

Former Army Chief General VK Singh (Retd) hit out at the Congress over party leader Priyanka Gandhi’s statement against the Agnipath scheme and alleged that the grand old party is finding fault with even the best work of the Modi government as it is upset with Rahul Gandhi’s questioning by the ED.

Over 387 protesters arrested in UP 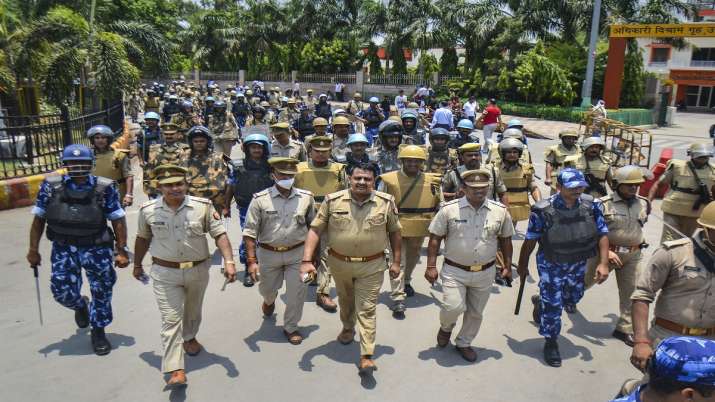 As many as 387 people have been arrested so far across Uttar Pradesh in connection with the violent protests against the Agnipath military recruitment scheme even as the agitations continued in several parts of the state, police said on Sunday.

On Sunday, police arrested nine people and detained several others in Saharanpur, Bhadohi and Deoria districts for their alleged involvement in the violent agitations, they said.

Police have lodged 34 FIRs in connection with the protests till Sunday, Additional Director General of Police (Law and Order) Prashant Kumar said.

Over 800 arrested in Bihar against Agnipath protest

Violent protests against Agnipath scheme appeared to be on the wane in Bihar on Sunday as a police crackdown on troublemakers continued and train services remained hit in view of security concerns.

According to a statement issued by Police Headquarters, altogether 804 people have been arrested so far in connection with the large-scale violence and arson, which had the state in its throes last week.

The number of FIRs registered in connection with the protests stood at 145 and the tracing of persons suspected of instigating or indulging in anti-social activities continued.

Internet services remain suspended in 17 out of 38 districts in the state and heavy deployment of police and paramilitary forces continued in places, the PHQ release said.

(With inputs from agencies)

Sharjeel Imam gets bail in Jamia violence case: Will remain in jail for conspiracy of Delhi riots