While Tamannaah was dressed in an ethnic shimmery light blue suit paired with earrings, Bhandarkar opted for a printed lime green kurta. Both of them had tilaks on their foreheads. At the Lalbaugcha Raja Ganesh Mandal, both Tamannaah and Bhandarkar happily obliged to click selfies with their fans who were among the large crowd of devotees.

Here are some of the pictures from her visit: 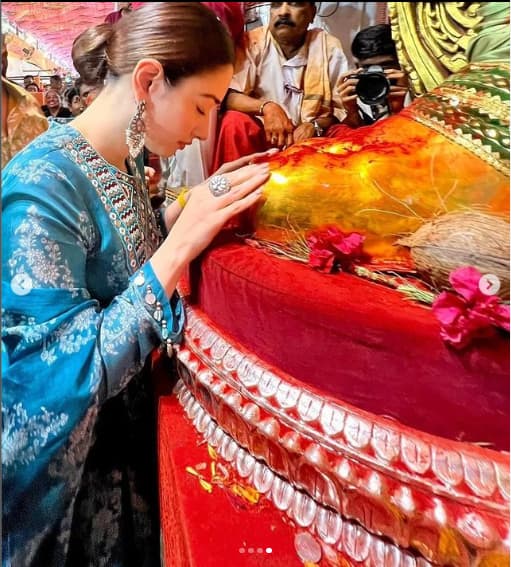 Lalbaugcha Raja is famous not only for being one of the largest and oldest Ganpati in the city but also for being a Navsacha Ganpati. The idol was established in 1934.In 2020 due to the COVID-19 pandemic, the Lalbaugcha Raja Sarvajanik Ganeshotsav Mandal had to cancel its traditional festivities for the first time in 86 years. However, the iconic 14-feet-tall Ganesha idol was unveiled on August 30 after a hiatus of 2 years.

Meanwhile, the shoot for Bhandarkar`s `Babli Bouncer` was completed this year in March and the movie is set to premiere on Disney Plus Hotstar in Hindi, Tamil and Telugu on September 23.`Babli Bouncer` is touted as a coming-of-age feel-good story with a slice-of-life comedic tone set in the real `bouncer town` of North India – Asola Fatepur will see Tamannaah in a never seen before avatar, as Babli Bouncer.

Produced by Star Studios and Junglee Pictures, Babli Bouncer is directed by Madhur Bhandarkar and stars Tamannaah Bhatia, in the lead along with Saurabh Shukla, Abhishek Bajaj and Sahil Vaid in pivotal roles.

Can you Take Too Much Vitamin D? 3 out of 4 Indians Suffer from Vitamin D Deficiency; Check Daily Dietary Intake