If reports are to be believed, Tamannaah Bhatia will get married soon. She is rumoured to be dating a ‘businessman’ from Mumbai and apparently, the actress said yes when he popped the question. While the actress hasn’t verified the rumours, she finally reacted to them with a fun take. In fact, Tamannaah introduced her to-be ‘businessman husband’ to her fans and followers on Instagram.

Paparazzo Viral Bhayani posted a video of Tamannaah Bhatia saying she has decided to get married. In the video, the actress looks phenomenal wearing an emerald green saree. Putting the rumours to rest, she took to her Instagram Story and and posted a savage video. In the video she is seen dressed as a man with “Introducing my businessman husband,” written over it. She also added hashtags, ‘marriage rumours’, ‘everyone scripting my life’. 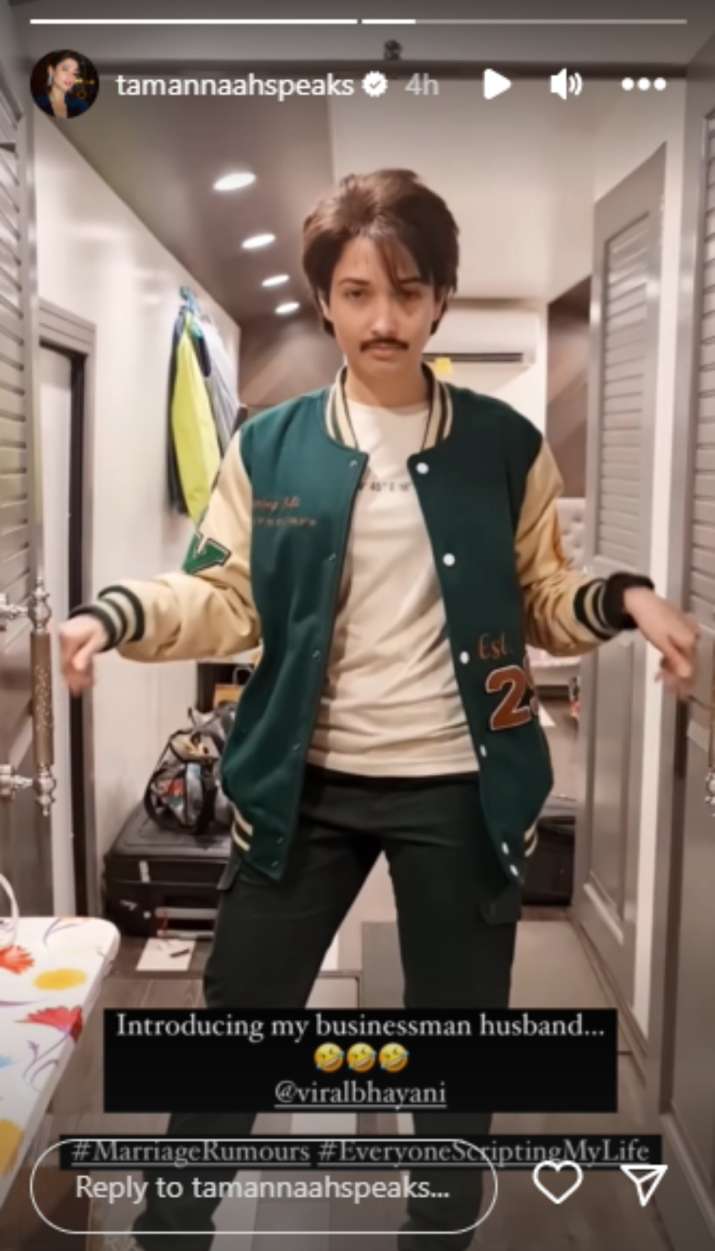 For the unversed, rumours are rife that a Mumbai based businessman has been making efforts to win Tamannaah over for some time. There are speculations floating around that the actress has made the decision to get married and have a family. She is reported to have been in a relationship with this said young businessman who has made her a marriage proposal. Tamannaah appears to have accepted the proposal at last. However, we are still awaiting an official announcement regarding Tamannaah’s nuptials.

Related | Tamannaah Bhatia set to tie the knot with Mumbai-based businessman? Here’s what we know!

On the work front, Tamannaah was last seen in ‘Babli Bouncer’. A coming-of-age feel-good story with a slice-of-life comedic tone is set in the real ‘bouncer town’ of North India – Asola Fatepur. Directed by Madhur Bhandarkar, the film also stars Saurabh Shukla, Abhishek Bajaj and Sahil Vaid in pivotal roles.

Tamannaah’s other film ‘Gurtunda Seetakala’ is also slated to hit the theatres on the same day, September 23, 2022. Helmed by Nagashekhar, the film is a romantic drama which also stars south actor Satya Dev in a prominent role.

In addition to this, she has F3, Bole Chudiyan, Bhola Shankar, and many more. She will also be seen in Amazon Prime Video’s ‘Jee Karda’. The series also stars Suhail Nayyar and Aashim Gulati. It is helmed by Arunima Sharma and produced by Dinesh Vijan. It is made under the banner of Maddock Films. The series follows seven childhood friends as they navigate adulthood while celebrating life.