A day after eminent playback singer-dubbing artist Chinmayi Sripada shared pictures of her newborn twin babies with husband Rahul Ravindran, her Instagram account was suspended. Sharing to Twitter, she revealed that she received vulgar DMs from men. She revealed that her account was removed after she complained on Instagram about males sending her pictures of their pen**es. Additionally, Chinmayi disclosed the username of her backup Instagram account – chinmayi.sripada.

She wrote, “Instagram has basically removed MY account for reporting men who send ME their penises on DMs. Its been going on for a while where I report but MY access was barred. Anyway that’s that. My backup account is chinmayi.sripada” 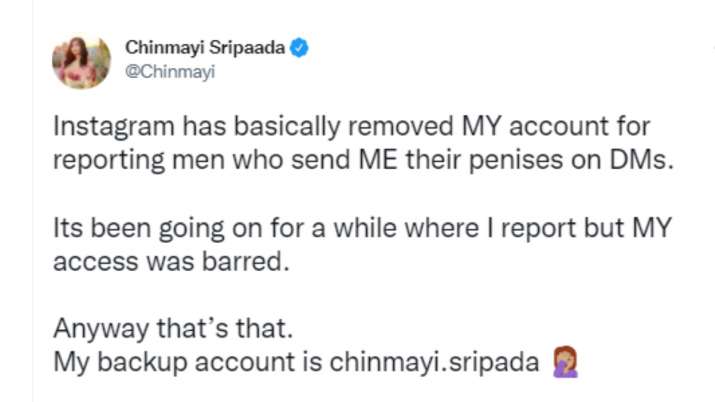 Soon, several of her fans showered love and support to the singer, a user said, “It’s not a win for them. They can delete your account but they cannot delete the strength in your voice to speak up. Keep speaking up. We got you” Another wrote, “How many accounts can they delete.. We will always be there with you.. Love you for what you are.”

These social media businesses apparently, operate differently and take surprising actions in the name of policies. If we are to believe vocalist Chinmayi Sripada, who is best known for providing a voice for noted actresses, especially Samantha Ruth Prabhu, Instagram has taken extreme measures in her current situation.

Chinmayi has been subjected to a lot of abuse on social media since she spoke out for the #MeToo movement and named some prominent figures in the Tamil film industry who exploit women and attempted to engage in sexual misconduct with girls.