Russia Ukraine war: It has been six months since when Russia launched its invasion of Ukraine, and as of yet, there seems no end to the conflict. Before the Russian withdrawal from Kyiv and surrounding areas on April 2, suburbs and towns near the city’s airport were pounded by rockets, artillery fire and aerial bombardment in an effort to break the Ukrainian defenses.

The entire city, blocks of apartments were blackened by the shelling in Irpin, just 20 kilometers (12 miles) northwest of the capital.

Some of the most dramatic scenes from the early stages of the war were of the evacuation from Irpin underneath a destroyed highway bridge, where thousands escaped the relentless attacks.

But at age 12, his childhood has been abruptly cut short. His family’s home was destroyed and his mother seriously wounded as Russian forces bombarded Kyiv’s suburbs and surrounding towns in a failed effort to seize the capital.

“I want to be an Air Force pilot,” says Danyk, as tears roll down his eyes. His mother Luda recalls being pulled from the rubble, covered in blood, after shrapnel tore through her body and smashed her right foot.

Twenty-two weeks after she was wounded, she’s still waiting to have her foot amputated and to be fitted with a prosthetic. She keeps the piece of shrapnel surgeons removed during one of her many operations. 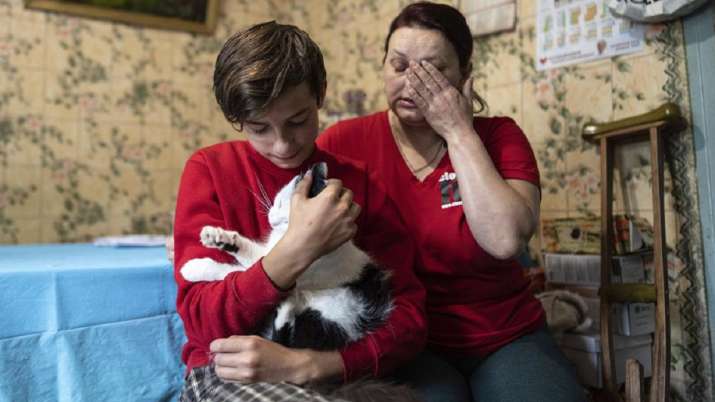 Danyk lives with his mother and grandmother in a house near Chernihiv, a town 140 kilometers (nearly 90 miles) north of Kyiv, where a piece of tarp covers the broken bedroom windows.

He sells milk from the family’s cow that grazes in the nearby fields. A handwritten sign wrapped in clear plastic on the front gate reads: “Please buy milk to help my mother who is injured.”

Before schools reopen on September 1, Danyk and his grandmother have been joining volunteers several days a week clearing the debris from buildings damaged and destroyed in the Russian bombardment outside Chernihiv. On the way, he stops at his old house, most of it smashed to the foundations.

“This was my bedroom,” he says, standing next to scorched mattress springs that protrude from the rubble of bricks and plaster. 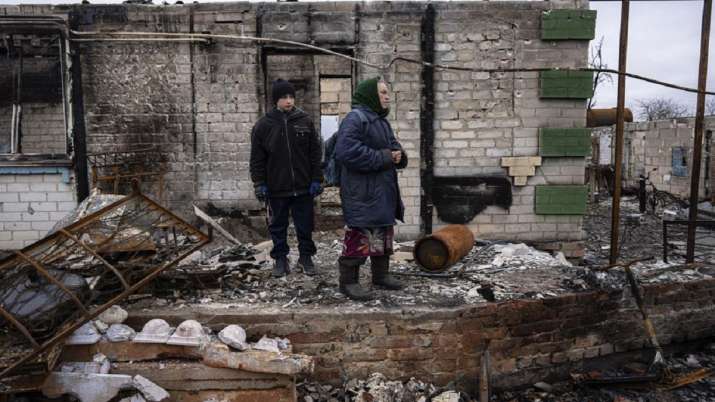 Polite and soft-spoken, Danyk says his father and stepfather are both fighting in the Ukrainian army.

Huseinov was there for 16 days, organizing crossings where the elderly were carried along muddy pathways in wheelbarrows.

Reconstruction work has begun on the bridge, where mangled concrete and iron bars hang over the river. Clothing and shoes from those who fled can still be seen tangled in the debris.

“This bridge was the road from hell,” says Huseinov, 34, standing next to an overturned white van still lodged into a slab of smashed concrete.

“We got people out of (Irpin) because conditions were terrible — with bombing and shelling,” he said. “People were really scared because many lost their children, members of their family, their brothers and sisters.”

Crosses made from construction wood are still nailed to the railings of the bridge to honor those lost and the effort to save civilians.

“The whole world witnessed our solidarity,” says Huseinov, who grew up in Germany and says he would never again take the good things in life for granted.

“In my mind, everything has changed: My values in life,” he said. “Now I understand what we have to lose.”

“Before the war, it was another life.” 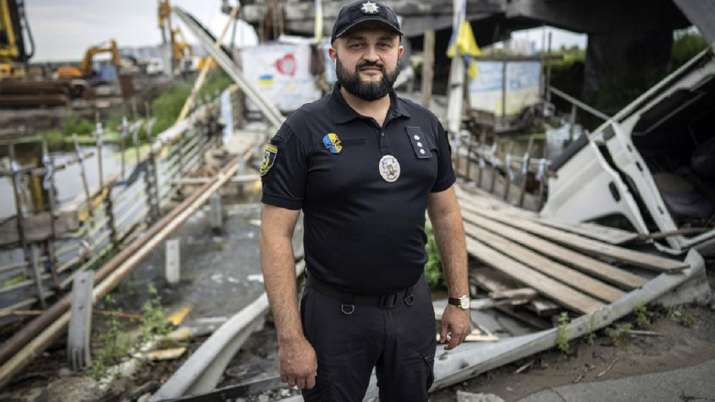 The largest mass grave in Bucha — a town outside Kyiv that has become synonymous with the brutality of the Russian attack — is behind the church.

“This grave contained 116 people, including 30 women, and two children,” said Father Andriy, who has conducted multiple burial services for civilians found shot dead or killed by shelling, some still only identified as a number while the effort to name all of Bucha’s victims continues.

Many of the bodies were found before the Russians pulled out of the Kyiv region, Father Andriy said. 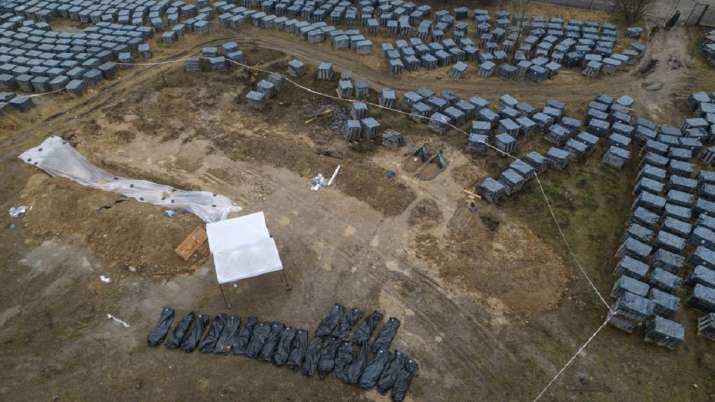 “We couldn’t bury people in the cemetery because it’s on the outskirts of the city. They left people, dead people, lying in the street. Dead people were found still in their cars. They were trying to leave but the Russians shelled them,” said Father Andriy, wearing a large cross around his neck and a dark purple cassock.

“That situation lasted two weeks, and the local authorities began coming up with solutions (to help) relatives and loved ones. It was bad weather and wild animals were discovering the bodies. So something had to be done.”

He decided to carry out burial services in the church yard, many next to where the bodies had been discovered.

(With inputs from AP)

Till now these Bollywood stars are bachelors, one has decided to remain unmarried after being impressed by their character.