PRZEWODOW, Poland (AP) — NATO member Poland and the head of the military alliance both said Wednesday a missile strike in Polish farmland that killed two people did not appear to be an intentional attack, and that air defenses in neighboring Ukraine likely launched the Soviet-era projectile against a Russian bombardment that savaged the Ukrainian power grid.

“Ukraine’s defense was launching their missiles in various directions and it is highly probable that one of these missiles, unfortunately, fell on Polish territory,” said Polish President Andrzej Duda. “There is nothing, absolutely nothing, to suggest that it was an intentional attack on Poland.”

NATO Secretary-General Jens Stoltenberg, at a meeting of the 30-nation military alliance in Brussels, echoed the preliminary Polish findings, saying: “We have no indication that this was the result of a deliberate attack.”

The initial assessments of Tuesday’s deadly missile landing appeared to dial back the likelihood of the strike triggering another major escalation in the nearly 9-month-old Russian invasion of Ukraine. If Russia had deliberately targeted Poland, that could have risked drawing NATO into the conflict.

Still, Stoltenberg and others laid overall but not specific blame on Russian President Vladimir Putin’s war.

Before the Polish and NATO assessments, US President Joe Biden had said it was “unlikely” that Russia fired the missile but added: “I’m going to make sure we find out exactly what happened.”

Three US officials said preliminary assessments suggested it was fired by Ukrainian forces at an incoming Russian one. The officials spoke on condition of anonymity because they weren’t authorized to discuss the matter publicly.

That assessment and Biden’s comments at the Group of 20 summit in Indonesia contradicted information earlier Tuesday from a senior US intelligence official who told The Associated Press that Russian missiles crossed into Poland.

Ukraine, once part of the Soviet Union, fields Soviet- and Russian-made weaponry, including air-defense missiles, and has also seized many more Russian weapons while beating back the Kremlin’s invasion forces.

Ukrainian air defenses worked furiously against the Russian assault Tuesday on power generation and transmission facilities, including in Ukraine’s western region that borders Poland. Ukraine’s military said 77 of the more than 90 missiles fired were brought down, along with 11 drones.

Russia said it didn’t launch the missile that landed in Poland. A Defense Ministry spokesman said no Russian strike Tuesday was closer than 35 kilometers (22 miles) from the Ukraine-Poland border. The Kremlin denounced Poland’s and other countries’ initial response and, in rare praise for a US leader, hailed Biden’s “restrained, much more professional reaction.”

“We have witnessed another hysterical, frenzied, Russo-phobic reaction that was not based on any real data,” Kremlin spokesman Dmitry Peskov said.

Still, Ukraine was under countrywide Russian bombardment Tuesday by barrages of cruise missiles and exploding drones, which clouded the initial picture of what exactly happened in Poland and why.

The Polish president said the projectile was “most probably” a Russian-made S-300 missile dating from the Soviet era. 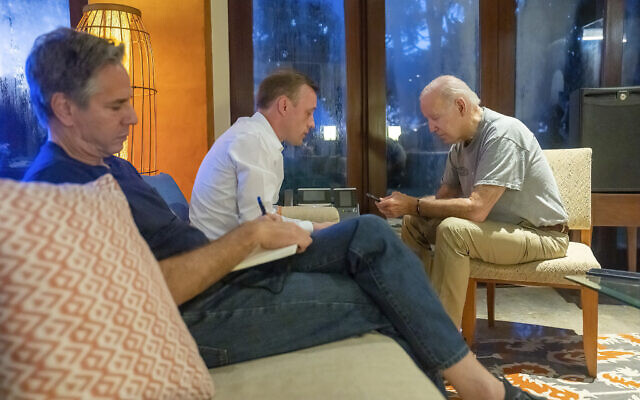 “It was a huge blast, the sound was terrifying.” said Ewa Byra, the primary school director in the eastern village of Przewodow, where the missile struck. She said she knew both men who were killed — one was the husband of a school employee, the other the father of a former pupil.

Another resident, 24-year-old Kinga Kancir, said the men worked at a grain-drying facility, one as a guard, the other driving tractors.

“It is very hard to accept,” she said. “Nothing was going on and, all of a sudden, there is a world sensation.”

Ukraine said it wants immediate access to the site. Oleksiy Danilov, head of Ukraine’s National Security and Defense Council, advocated on Twitter for a “joint examination of the incident.”

In Europe, NATO members Germany and the UK laced calls for a thorough investigation with criticism of Moscow.

“This wouldn’t have happened without the Russian war against Ukraine, without the missiles that are now being fired at Ukrainian infrastructure intensively and on a large scale,” said German Chancellor Olaf Scholz.

UK Prime Minister Rishi Sunak said: “This is the cruel and unrelenting reality of Putin’s war.” 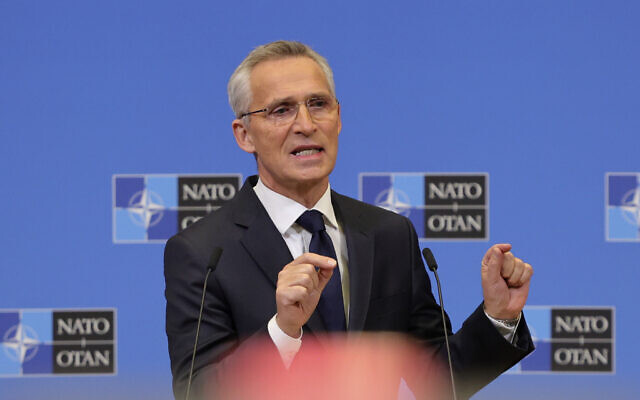 Ukrainian President Volodymyr Zelensky called it “a very significant escalation.” On the other end of the spectrum, China called for calm and restraint.

Damage in Ukraine from the aerial assault was extensive and swaths of the country were without power. Zelensky
said about 10 million people lost electricity but tweeted overnight that 8 million were subsequently reconnected, with repair crews laboring through the night. Previous Russian strikes had already destroyed an estimated 40% of the country’s energy infrastructure.

Ukraine said the bombardment was the largest on its power grid so far. Pope Francis said it caused him “great pain and concern.” 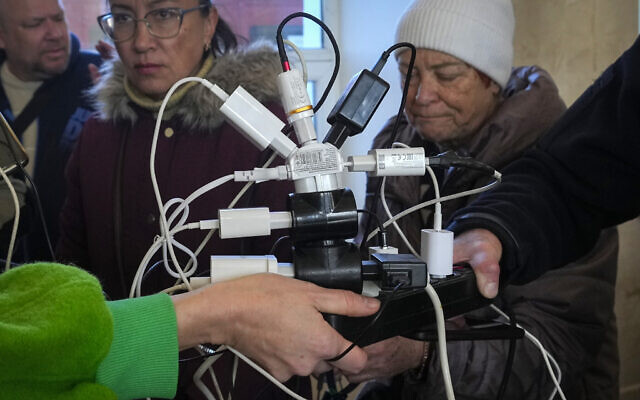 People charge their phones, try to connect to the internet and make phone calls, in central square in Kherson, Ukraine, November 15, 2022. (Efrem Lukatsky/AP)

A Washington-based think tank, the Institute for the Study of War, said Ukraine’s downing of so many Russian missiles Tuesday “illustrates the improvement in Ukrainian air defenses in the last month,” which are being bolstered with Western-supplied systems. Sweden said Wednesday an air defense system with ammunition would form part of its latest and largest package of military and humanitarian aid to Ukraine, worth $360 million.

The US has been Ukraine’s largest supporter, providing $18.6 billion in weapons and equipment. US Defense Secretary Lloyd Austin said flows of US weapons and assistance would continue “throughout the winter so that Ukraine can continue to consolidate gains and seize the initiative on the battlefield.”

Russian attacks Tuesday killed at least six civilians and wounded another 17, said a senior official, Kyrylo Tymoshenko. In the Kyiv region, a missile strike killed a 69-year-old woman visiting her husband’s grave at a cemetery, the regional police chief said. In central Kyiv, a woman was killed in one of two residential buildings that were damaged, the mayor said. 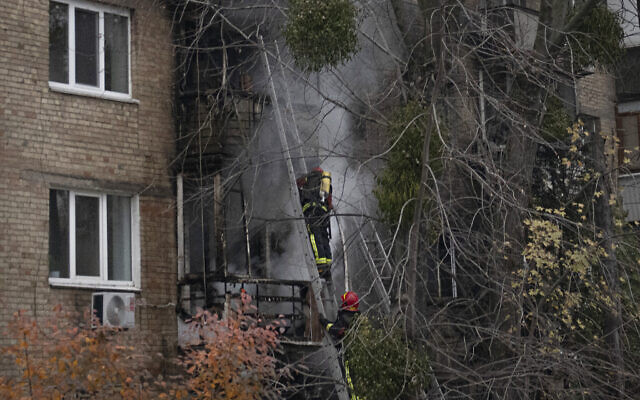 Ukrainian State Emergency Service firefighters work to extinguish a fire at the scene of a Russian shelling in Kyiv, Ukraine, November 15, 2022. (Andrew Kravchenko/AP)

The Russian bombardment followed days of euphoria in Ukraine sparked by one of its biggest military successes — the retaking last week of the southern city of Kherson.

It also affected neighboring Moldova. It reported massive power outages after the strikes in Ukraine disconnected a power line to the small nation.

With its battlefield losses mounting, Russia has increasingly resorted to targeting Ukraine’s power grid, seemingly hoping to turn the approach of winter into a weapon by leaving people in the cold and dark.

4 DIY Organic Hair Oils For Soft And Shiny Hair; Here’s How You Prepare Them