Dozens of Hezbollah supporters protested on Israel’s northern border on Friday marking the Iran-initiated “al-Quds Day,” or Jerusalem Day, a traditional show of support for the Palestinians as the terror group’s leader praised recent deadly attacks inside Israel.

The demonstrators gathered across from the Israeli town of Metulla, waving Hezbollah, Lebanese and Iranian flags and chanting about liberating Jerusalem.

The Lebanese army was at the scene, keeping them away from the border fence. The IDF was also monitoring the protest.

Marches by Hezbollah fighters and rallies were also held in Hezbollah neighborhoods in Beirut to mark al-Quds Day, an annual event on the last Friday of Ramadan.

In a speech to mark the protest rallies, Hezbollah leader Hassan Nasrallah praised a string of deadly terror attacks in Israel in recent weeks and rocket attacks from Gaza and Lebanon saying it showed that Palestinians had not lost their will to resist Israel.

Hezbollah fighters march as they hold flags of Lebanon and Hezbollah during a rally to mark Jerusalem Day or al-Quds Day, in a southern suburb of Beirut, Lebanon, Friday, April 29, 2022. (AP Photo/Hassan Ammar)

On Monday a rocket that was fired into Israel from Lebanon landed in an open area near Kibbutz Matzuva, close to the border, without causing damage or injuries.

The IDF responded with artillery fire against the launchers.

There have been several instances of rocket fire from Lebanon into Israel in recent years, with most blamed on Palestinian factions in the country, not the Hezbollah terror group, which is thought to possess a massive arsenal of missiles that can reach across Israel.

However, it is unlikely that terrorists in southern Lebanon would be able to fire rockets without at least the tacit approval of the Iran-backed group, which maintains tight control over the area.

Nasrallah also warned Israel against any aggression in Lebanon during their upcoming elections, saying Hezbollah would not be “distracted” and also warned that if Israel continues to target Iran’s presence in the region, Tehran could eventually retaliate by striking deep inside Israel.

Israel has carried out hundreds of strikes against Iranian targets, mostly in Syria, including three this month.

As a rule, Israel’s military does not comment on specific strikes in Syria, but has acknowledged conducting hundreds of sorties against Iran-backed groups attempting to gain a foothold in the country. It says it also attacks arms shipments believed to be bound for those groups.

Nasrallah condemned Arab nations that have normalized ties with Israel in recent years, calling their actions “the ugliest form of hypocrisy.”

The comments echoed those of Iranian Supreme Leader Ayatollah Ali Khamenei who spoke out against the United Arab Emirates and Bahrain for normalizing ties with Israel. 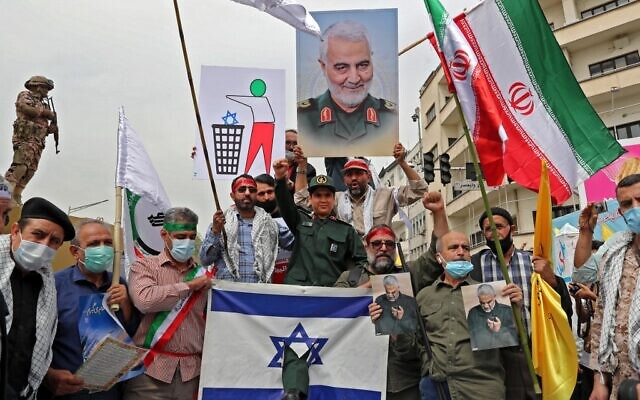 Iranians prepare to set an Israeli flag on fire next to a picture of late Iranian general Qasem Soleimnai during a rally marking al-Quds Day in Tehran, on April 29, 2022. (AFP)

“We condemn the treacherous move to normalize relations” with Israel, he said, and reiterated Iran’s support for the Palestinian cause.

Nasrallah claimed that Iran would attack any of these countries if they let Israel use them as a base for strikes on Iran.

At the main al-Quds rally in Tehran, demonstrators chanted “Death to Israel” and “Death to America” — slogans that have become tradition in mass rallies in Iran since its revolution — and set fire to American, British and Israeli flags.

Iranian state TV later showed a variety of ballistic missiles on display at the rally, describing them as “Israel hitters.”

Top Iranian officials across the country delivered fiery speeches calling for Israel’s destruction and vowing support for anyone who fights the Jewish state.

Iran has been marking the day, the last Friday of the Muslim holy fasting month of Ramadan, since the start of its 1979 Islamic Revolution led by the late Ayatollah Ruhollah Khomeini. The name al-Quds Day comes after the Arabic name for Jerusalem. Rallies were also held in Pakistan and Syria.

Israel is now a far more prominent player on the world stage than its size suggests. As The Times of Israel’s Diplomatic Correspondent, I’m well aware that Israel’s security, strategy and national interests are always scrutinized and have serious implications.

It takes balance, determination, and knowledge to accurately convey Israel’s story, and I come to work every day aiming to do so fully.

Financial support from readers like you allows me to travel to witness both war (I just returned from reporting in Ukraine) and the signing of historic agreements. And it enables The Times of Israel to remain the place readers across the globe turn to for accurate news about Israel’s relationship with the world.

If it’s important to you that independent, fact-based coverage of Israel’s role in the world exists and thrives, I urge you to support our work. Will you join The Times of Israel Community today?

Day ahead of French Open 4th round, Rafael Nadal in attendance at Champions League final to root for Real Madrid