“This American Life” host Ira Glass and celebrated Israeli author Etgar Keret met on Wednesday night for “Stories, Podcasts & Other Animals,” an hour-and-a-half conversation that delved into their work as consummate storytellers, Glass’s Hebrew skills and what makes a story.

The two men, one Israeli, the other American, and nine years apart in age, are deeply comfortable with one another, close enough to tease one another onstage as they drew closer to their topic of storytelling and how they each accomplish that task.

They laugh a lot, and the audience is often laughing along with them.

“We recognized that we both need the stories,” said Keret. “And we both tell stories differently. It’s a good starting point for a friendship.”

That was their premise on Wednesday night, and they were off, for the next hour-plus, using different stories, some told on “This American Life” or in Keret’s books, to illustrate how differently they define storytelling.

The sold-out auditorium of the Tel Aviv Museum of Art was filled with local celebrities and podcasters, including Channel 12 anchor and Unholy podcast co-host Yonit Levi and vocalist Shai Tsabari.

“Half of the audience are people who work in news and TV and radio,” said Keret at one point.

But everyone’s attention was focused on stage, where Keret was comfortably slouched in his gray chair, while Glass, elegantly attired in suit and oxfords, was busy throughout, shuffling notes, using his laptop and tablet to show photos and playing clips from “This American Life,” a weekly podcast on US National Public Radio.

“It took 2,000 years for Ira to get here,” quipped Keret, ordering Glass to say something in Hebrew:

Hebrew, and Glass’s efforts to improve upon the language he learned during ten days of afternoon Hebrew school in 1960s Baltimore was just one of the topics discussed by the two friends, who met 16 years ago when Glass first interviewed Keret.

The two have conducted many of these public conversations, although this was their first in Israel, where Glass is currently visiting with his partner and her son.

They showcased the investigative reporter — Glass — versus the fantastical fiction writer — Keret.

There were stories, and more stories, including an episode they experienced together at New York’s Museum of Modern Art and a comical tale about Keret meeting the person he thought was his German publisher in a cafe, but who turned out to be a diamond trader.

Israeli writer and artist Etgar Keret during an interview with AFP at his home in Tel Aviv on November 5, 2020. (Emmanuel Dunand/AFP)

They could have gone on telling stories, but the two gifted storytellers were weaving their own story arc, leading to the crux of the conversation in which Glass described how he builds his show, and tells the myriad stories created for each episode.

“What I find beautiful about your show are the episodes about the smallest things,” said Keret. “It could be a teen getting dumped by his girlfriend, or a dog running away.”

Each story resonates, said Keret, offering something human to cling on to, making a teenage saga “feel like World War III.”

Glass expounded on that concept, describing the process of sorting stories, finding a plot and a character that listeners can connect with, and the overriding need to “drive toward some thought about that world,” he said.

Every part of the story has to seem new, added Glass, and while there are “weird X-Factor” elements in some stories, other stories don’t work out, particularly if the main character can’t tell his or her own story.

“I don’t care how crazy the story is,” said Glass, “you need to be on some kind of mission. You need a through line, a reason to care about all those incidents.”

From there, the two moved to a “This American Life” episode about a New Zealander who was bitten by a shark as a young teenager, nearly dying in the aftermath.

The emotional part of the story wasn’t actually the shark attack, but was about the parents, who were skeptical, at first, of their daughter’s pain and discomfort during the night following the attack. That conundrum formed the basis of the story, said Glass. 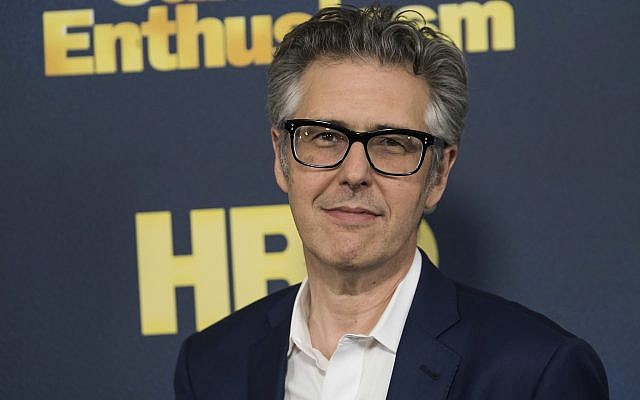 Ira Glass of ‘This American Life’ is credited with making podcasting what it is today. (Charles Sykes/Invision/AP)

The two discussed how they create their stories, with Keret not always knowing where a story arc is going, while Glass shapes his.

“When things happen, you take it to [how it would affect you],” said Keret. “It’s a metaphor for how I write. I bite the story, and it’s never right, and I think if I write a few paragraphs, it will fall into place.”

“When I interview, I’m editing it in my head,” said Glass. “I divide the story into chapters in my head.”

“Do you feel manipulative when you do that?” asked Keret.

“Sure, but not in a negative way,” said Glass. “That’s show business, baby!”

“Are you manipulating the audience?” asked Keret.

A good story, said Keret, has to be smarter than the person who wrote it.

“For a story to be like life, it should be something you don’t understand,” he said.

His best stories have that, said Glass. But even then, he still has to write the script, and then perform it into the microphone, a “boring, technical task.”

“If you do it wrong, you can oversell it or undersell it,” he said, “If you do it perfectly, you have to be just visible.”