NEW YORK — Jewish gun owners in New York are suing the state’s leadership over a new law barring firearms in places of worship.

The lawsuit argues that the legislation infringes on the First Amendment’s protection of the free exercise of religion, and the Second Amendment, which guarantees the right to bear arms. Jewish congregants cannot freely worship if they are unprotected or fearful, according to the complaint.

New York’s Concealed Carry Improvement Act went into effect at the beginning of last month, raising the requirements for carrying concealed firearms, including by barring guns in “sensitive locations” such as houses of worship.

“A lot of people are very concerned because one of the main reasons why people decide to buy a firearm and to train is to be able to protect themselves, especially when they go to shul [synagogue],” said Tzvi Waldman, founder of the New York State Jewish Gun Club, which organized the suit.

Based in Rockland County, an area north of New York City with a large ultra-Orthodox population, the club provides firearms training and advocacy for Jewish community members.

New York’s Democratic leadership announced the Concealed Carry Improvement Act on July 1 following a June US Supreme Court decision that overturned a previous state law requiring concealed permit applicants to prove “proper cause,” meaning a reason they needed the permit. The Supreme Court said the law implemented in 1911 was unconstitutional.

Hochul, whose state has relatively strict gun laws, called the ruling “a reckless decision removing century-old limitations on who is allowed to carry concealed weapons in our state — senselessly sending us backward and putting the safety of our residents in jeopardy.” Breaking the new law is a Class E felony, a serious crime, but the lowest level of felony.

Guns laws are one of the main fault lines dividing conservative and liberal America. Firearms killed close to 49,000 Americans in 2021, including over 26,000 suicides, according to provisional data from the CDC. New York has a relatively low rate of gun violence.

Waldman said gun ownership in the religious Jewish community is “widespread,” but those with firearms keep it quiet because they do not want to unsettle children and other congregants, or spook neighbors. The gun club claims several hundred members.

The lawsuit argues that religious Jews spend a significant amount of time in synagogue, especially during Shabbat and holidays, when they will be barred from carrying legally licensed guns during those times. Antisemitic incidents are at a record level in New York, with attacks happening nearly every dayincluding against synagogues.

The gun club is based in Monsey, where an antisemitic machete-wielding attacker murdered a Jewish man during a Hanukkah gathering at a rabbi’s home in 2019. Weeks earlier, two antisemitic attackers gunned down several people at a New Jersey kosher supermarket.

In other parts of the US, deadly attacks have killed Jews during prayer in recent years in Pittsburgh and Californiaand a gunman took worshipers hostage in Texas earlier this year. 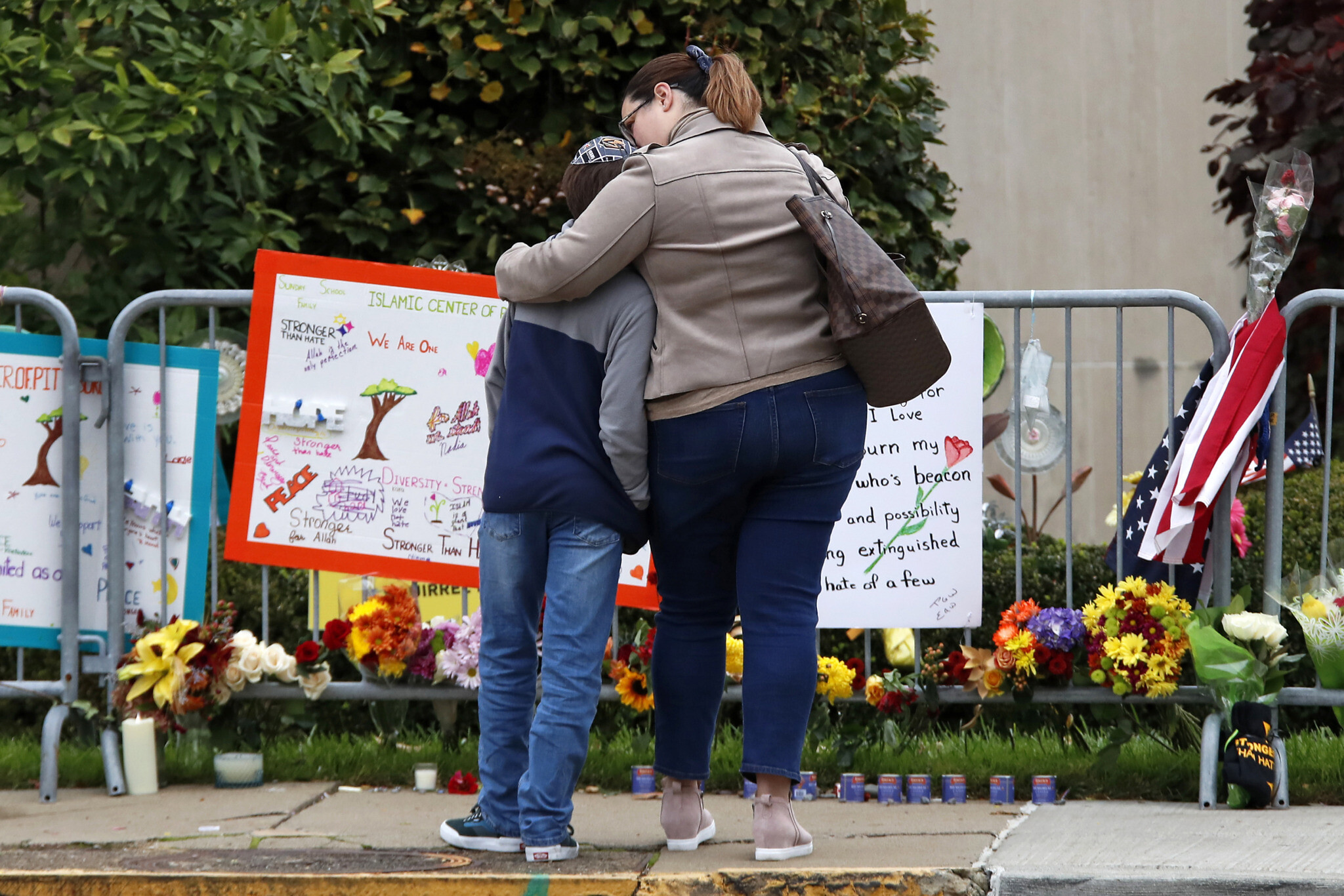 A mother hugs her son in front of a memorial at the Tree of Life synagogue in Pittsburgh on October 27, 2019. (AP/Gene J. Puskar/File)

The lawsuit lists those attacks and others, including against churches and mosques, as evidence “houses of worship have long been targeted for violent crime.”

“This is emphatically the case for Jewish houses of worship,” the lawsuit says. “The law perversely renders ‘sensitive locations’ more sensitive: these are locations where, would-be killers may fairly assume, people have been made defenseless.”

Religious Jews also do not carry cell phones during Shabbat and most holidays, making it more difficult to contact law enforcement in an emergency.

Arming congregants is not a recommended approach for security, though, argued Brad Orsini, the senior national security adviser for the Secure Community Network, a safety and security organization for Jews in North America.

“Having a congregant with a weapon is really kind of the last thing you’d ever want to think about because you want to make sure you’re following all the other best practices out there that have nothing to do with firearms,” he said.

Synagogues should focus on keeping threats out of the building in the first place with measures like monitored surveillance, locked doors and screening at the entrance, and congregants should be trained in how to react in a crisis, said Orsini, a veteran of the Marine Corps and FBI.

“An armed presence is only one small measure of an effective security program. That’s why we always talk about a layered holistic security approach and the last thing you do is put an armed presence in there,” he said.

The organization recommends using on or off duty law enforcement for a trained and visible armed presence outside a synagogue, and if that’s unavailable, a private security company.

A guide released by the organization in 2020 on synagogue security stressed that “an armed guard must be part of a broader plan.”

Volunteer congregants are the last of six recommended options for an armed presence in the report, due to a lack of experience and training and legal liabilities, among other issues. The group called armed congregants “extremely risky.”

“Things can go wrong,” the report warned, including the possibility of “serious legal implications” if an armed congregant misuses a weapon.

Orsini said all congregations are different and need to handle security in their own way, in accordance with local laws, including small neighborhood places of prayer, known as shtiebels. The small congregations are vulnerable because they get less government funding for security measures, such as protective doors and guards, and have fewer members to pay for those measures. The UJA Federation of New York announced a program to better protect 50 shtiebels in New York earlier this year.

Orsini said he understands the security concerns for shtiebels and the desire to have an armed presence, but that resources should go to other security measures before arming congregants. 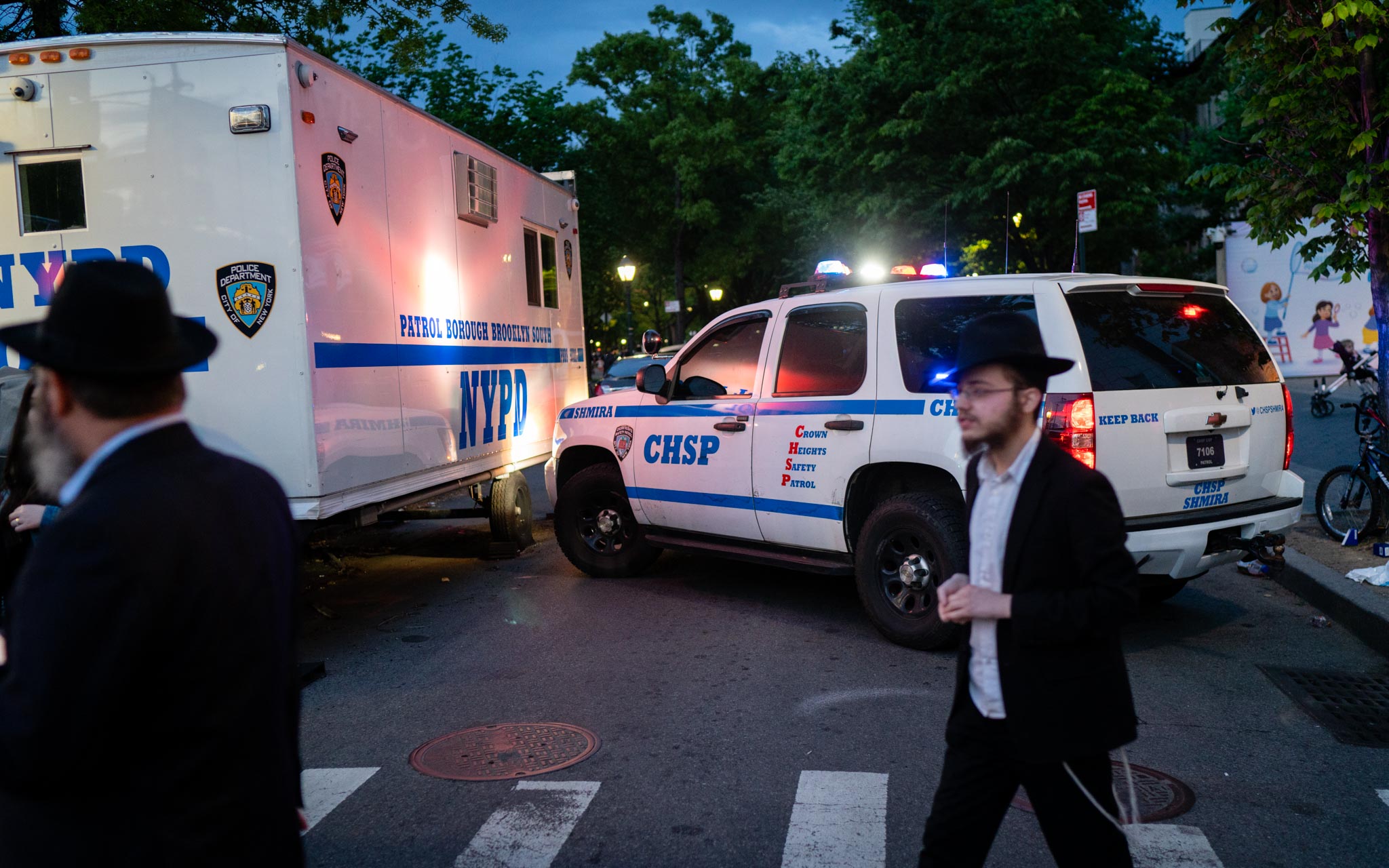 Illustrative: Police and community safety vehicles at a Jewish event in Brooklyn, New York City, May 19, 2022. (Luke Tress/Times of Israel)

One of the plaintiffs in the case, Steven Goldstein, whose Bnei Matisyahu congregation is made up of around 25 families, brought a firearm to services there for years, with a license and the approval of other congregants, according to the lawsuit. Police told him that he needed to stop bringing the gun after the new law came into effect.

The gun club connected with the plaintiffs through its network of participants and supporters. Both plaintiffs have concealed carry pistol licenses.

The new law bars rifles and shotguns from places of worship, in addition to concealed weapons, which generally refers to smaller handguns.

The legislation also outlaws all guns in “any place of worship or religious observation.” The suit says the phrasing is “unconstitutionally vague.”

The lawsuit states that, for devout Jews, a place of religious observation could be almost anywhere. The plaintiffs organize afternoon prayers with co-workers, making their work areas places of worship, it says.

This week, many observant Jews gather at lakes, ponds, streams or other public waterfronts for give up ceremonies that take place between Rosh Hashanah and Sukkot, making those places of “religious observation” covered by the law, Waldman said. Yom Kippur is a full day of religious observation, and Sukkot is a weeklong holiday that is celebrated outdoors.

“Having a gun is a Second Amendment right and religious observation is a First Amendment right, so she wants you to pick one,” Waldman said of the governor. “Either you have this, or that, and this concerns a lot of people in the community.”

The Jewish Gun Club said the judge on Friday denied the plaintiffs’ request for a preliminary restraining order that would have halted the law’s enforcement during the lawsuit. The first hearing will be held on October 28.

The lawsuit is the latest in a series of legal battles launched by religious Jews in New York over perceived restrictions on worship, including some others tied to larger societal disputes in the US.

The Modern Orthodox Yeshiva University is trying to block recognition of a campus LGBTQ on religious grounds in a high-profile case. Earlier this year, a lawsuit challenged New York City’s vaccine requirements, and in 2020, a leading Orthodox group sued New York’s governor in federal court for pandemic restrictions on religious gatherings.

Jairam’s 8 out of 10 ministers lost: only three won in the storm of Congress, Bhardwaj-Pathania lost despite changing the seat