Jerusalem was on edge Monday morning ahead of a massive prayer ceremony at the Western Wall for the Passover holiday, as authorities struggle to contain ongoing violence around the Jewish holy site.

The semi-annual priestly blessing event, known in Hebrew as “birkat hacohanim,” can draw tens of thousands to the Western Wall plaza.

This year’s events will be split into two sessions, with the first on Monday and the second on Wednesday, to reduce crowding for security reasons. A stampede at an overcrowded religious event at Mount Meron in northern Israel killed 45 people last year in Israel’s worst-ever peacetime disaster.

Thousands are expected to attend Monday’s official prayer session, which will begin at 8:45 a.m., but many worshipers will be in the area before and after the ceremony.

Around 2,500 police officers will secure the area around the time of the prayers.

Jewish pilgrims make their way to the ceremony on the intermediate days of the Passover and Sukkot festivals, with crowds spilling out from the wall’s plaza into the surrounding areas.

The ceremony, which sees male descendants of the Kohanim priestly caste gather to bestow a benediction, involves the raising of hands to perform the blessing, with those conducting the blessing wrapped in prayer shawls.

The Western Wall is one of the retaining walls of the Old City’s massive Temple Mount complex, the location of the two ancient Jewish temples and the most sacred place for Jews. The Western Wall is revered due to its proximity to the site of the temples, and is the closest spot to the Temple Mount where Jews can pray. Though they may visit the Mount, Jews are not allowed to pray at the holy site, which is overseen by a Jordanian custodian.

The Al-Aqsa Mosque on the Temple Mount is the third-holiest place for Muslims.

The site’s religious significance has made it a frequent flashpoint, including in recent weeks, and the emotional epicenter of the Israeli-Palestinian conflict.

This year, the Muslim holy month of Ramadan and the week-long Jewish Passover holiday have overlapped, further driving up friction between Israelis and Palestinians, as both religious groups flock to their holy places in Jerusalem. The confluence of the holidays this year has been seen for months as potential kindling for an eruption of violence.

The Temple Mount has seen clashes between Muslim worshipers and Israeli police in recent days, as tens of thousands attend prayers at the mosque for Ramadan. The Muslim holy month is often a period of high tension in Israel and the West Bank.

On Friday morning, hundreds of Palestinians fought with police at the site, resulting in hundreds of arrests. Tens of thousands later attended peaceful Ramadan prayers at the mosque.

Rioters at the mosque threw stones down onto the Western Wall plaza during the morning skirmishes, among other aggressive actions, prompting a forceful police response.

The Hamas terror group in Gaza called for an escalation at the site last week after a group of Jewish extremists called for Passover sacrifices there, inflaming Palestinians. Prime Minister Naftali Bennett and Israeli government officials have repeatedly ruled out the possibility of any sacrifices, and have prevented such ceremonies from taking place in years past.

On Sunday, Israeli police entered the Temple Mount complex as hundreds of Palestinians allegedly sought to block Jewish visitors from visiting the site. Non-Muslims can only visit the Temple Mount during certain hours and are barred from praying.

According to police, hundreds of Palestinian youths were stockpiling rocks in the Al-Aqsa compound that they planned to use along with iron bars and makeshift barricades to riot and try to prevent non-Muslims from touring the compound. 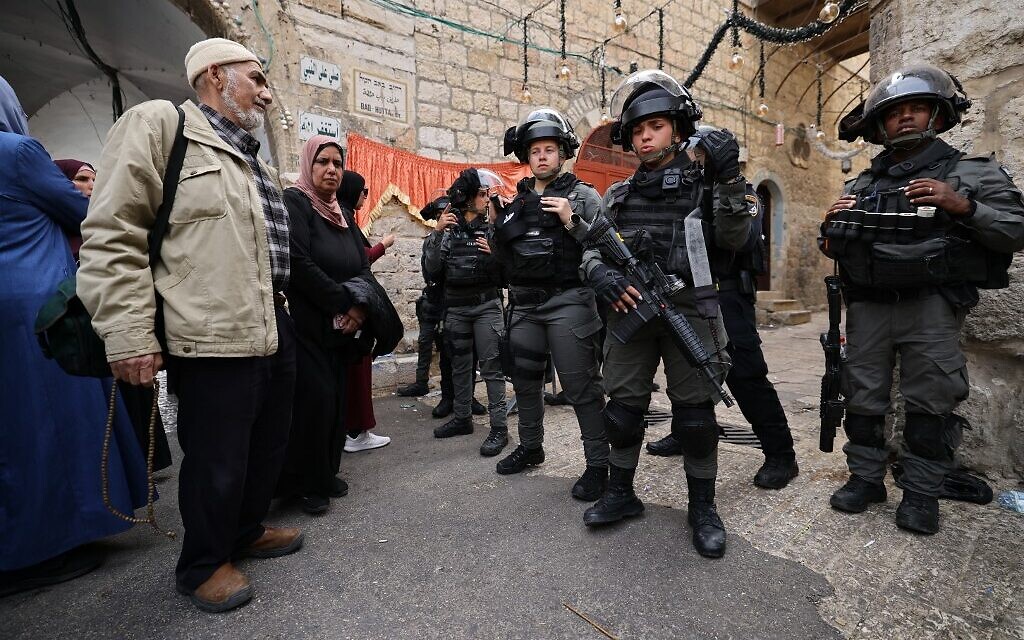 Palestinians face Israeli Border Police officers as they patrol the area in front of the Lion’s Gate in Jerusalem’s Old City, on April 17, 2022. (Ahmad Gharabli/AFP)

Early Sunday also saw Palestinian rock-throwers attack at least 10 Egged buses just outside the Old City en route to the Western Wall, smashing windows and leaving several passengers wounded, including a 13-year-old girl. Also on Sunday, a group of ultra-Orthodox Jews in prayer shawls was attacked while walking through the Old City.

Benett said on Sunday that Israeli forces have “free rein” to continue operations to maintain security, while stressing that officials were working to restore calm. He ordered more security for buses heading to the Western Wall and Old City.

Following a situational assessment with defense officials and ministers, Bennett said that an effort should be made to allow members of all religions to celebrate their holidays in Jerusalem, while at the same time “continuing to deal with rioters who violate public order.”

Tensions at the Temple Mount can easily snowball into wider conflagrations. Hamas and other Gaza-based terror groups have repeatedly invoked the powder keg holy site as a red line. Police actions to quell riots there last year helped trigger the 11-day war in Gaza in May.

In addition to the holiday friction, Israeli troops have been carrying out extensive raids in the West Bank following the deadliest outbreak of terror in Israel in years.

Israel is now a far more prominent player on the world stage than its size suggests. As The Times of Israel’s Diplomatic Correspondent, I’m well aware that Israel’s security, strategy and national interests are always scrutinized and have serious implications.

It takes balance, determination, and knowledge to accurately convey Israel’s story, and I come to work every day aiming to do so fully.

Financial support from readers like you allows me to travel to witness both war (I just returned from reporting in Ukraine) and the signing of historic agreements. And it enables The Times of Israel to remain the place readers across the globe turn to for accurate news about Israel’s relationship with the world.

If it’s important to you that independent, fact-based coverage of Israel’s role in the world exists and thrives, I urge you to support our work. Will you join The Times of Israel Community today?

Apply for an EMI Card Online!