The military’s liaison to the Palestinians on Wednesday said it had revoked the entry permits to Israel from hundreds of family members of a terrorist who killed three Israelis and wounded others a day earlier near a West Bank industrial zone.

On Tuesday morning, 18-year-old Muhammed Souf went on a stabbing and car-ramming spree at the Ariel Industrial Park and on a nearby highway, killing three and wounding three others seriously.

The three victims were named as Tamir Avihai, 50, Michael Ladygin, 36, and Motti Ashkenazi, 59.

In a statement, the Coordinator of Government Activities in the Territories (COGAT) — the Defense Ministry body responsible for Palestinian civil affairs — said the decision to revoke some 500 permits was made following an assessment held by Defense Minister Benny Gantz.

COGAT said Gantz approved the move “in accordance with the policy employed in the past year.”

Maj. Gen. Ghassan Alian, head of COGAT, has previously said the policy is intended to dissuade Palestinians from planning terror attacks, as doing so will harm their extended family’s livelihood. Critics have called it collective punishment.

According to COGAT, more than 3,000 work permits belonging to family members of Palestinian terrorists have been revoked in the past year.

Previously, only more immediate family members would have their entry and work permits to Israel revoked, following background checks that would determine they have ties to terrorists.

Souf, the attacker, was a resident of Hares, a town of about 3,500 residents, worked in the Ariel industrial zone and had a valid permit, but not one to enter Israel. Souf did not have any prior security offenses, a defense source told The Times of Israel.

He was shot dead by soldiers and armed civilians some 20 minutes after beginning his rampage.

Early Wednesday morning, the military made preparations for the demolition of his home. 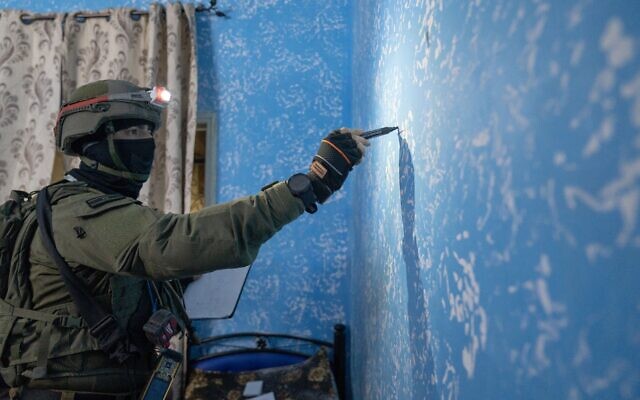 Israeli troops measure the home of Muhammed Souf, who killed three in a terror attack near Ariel a day earlier, in the West Bank village of Hares, on November 16, 2022. (Israel Defense Forces)

The attack came at the time of an Israeli anti-terror offensive mostly focused on the northern West Bank to deal with a series of Palestinian attacks that have left 29 people in Israel and the West Bank dead since the start of the year, including Tuesday’s attack.

The operation has netted more than 2,000 arrests in near-nightly raids, but has also left over 130 Palestinians dead, many of them — but not all — while carrying out attacks or during clashes with security forces.

I joined The Times of Israel after many years covering US and Israeli politics for Hebrew news outlets.

MP: Girl Paraded with Garland of Shoes in Hostel on Suspicion of Theft