The captivating trailer quickly captured viewers’ attention, and they quickly posted about their excitement on social media. The trailer garnered overwhelmingly positive reviews and comments from viewers, who described it as “gripping and powerful” and “a terrifying murder mystery.” While many are ready to learn the dark secrets, others are just excited to see the all-female cast united on screen.

Hush Hush follows the lives of four friends—a powerful lobbyist, Ishi Sanghamitra (Juhi Chawla), an ex-investigative journalist, Saiba Tyagi (Soha Ali Khan Pataudi), a trapped-in-society housewife, Dolly Dalal (Kritika Kamra), and a self-made fashion designer, Zaira Shaikh (Shahana Goswami). After being involved in something horrible one fateful night, their previously picture-perfect lives are turned upside down. The four friends struggle to get away from the threat while mired in secrets, lies, and treachery.

Here are some of the reactions of the viewers: 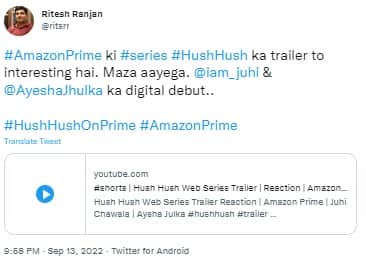 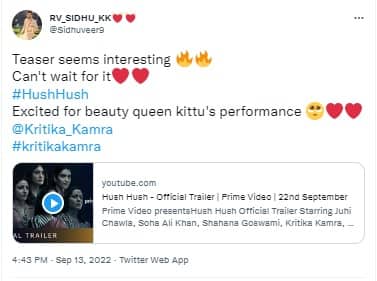 The series is full of action, drama, and suspense. Ayesha Jhulka plays the part of Meera, the administrator of an orphanage, and Karishma Tanna portrays Geeta Tehlan, a police officer, in the film. Tanuja Chandra, a celebrated filmmaker, is the show’s seven-episode creator and director. On September 22, Hush Hush will be made available to Prime members in India and in 240 other countries and territories via Prime Video.