The High Court of Justice on Monday granted the government a four-month delay to carry out the demolition of the West Bank Bedouin village of Khan al-Ahmar, following a series of postponements that have prevented its removal for years.

The three justices gave the state until February 1, 2023, to evacuate the hamlet, noting the current government is serving in a caretaker capacity ahead of the November 1 elections.

“We have no choice but to grant the request, despite its abnormality, and is a considerable extent to our displeasure,” the judges wrote in their decision.

The evacuation of the village has been pushed off repeatedly for four years due to several reasons. Last year, the court granted a similar postponement after the government claimed to have made progress toward a plan for evacuation, but claimed it needed more time to study the matter.

In response to Monday’s ruling, Meir Deutsch, chair of the pro-settlement group Regavim, accused the government of “not knowing how to protect the national interests of the State of Israel.”

“The interim government is able to sign a historic gas agreement and appoint senior officials, but is unable to respond to a basic question: Why is an illegal outpost that has already been ruled by the High Court over and over again to be destroyed still standing?” Deutsch said, referring to a proposed US-brokered maritime deal between Israel and Lebanon.

Illustrative: Supreme Court justices arrive for a hearing at the Supreme Court in Jerusalem on February 24, 2021. (Yonatan Sindel/Flash90)

Critics of the state’s handling of the affair say the demolition has been repeatedly pushed off to avoid an international incident, as the village has gained public backing from human rights activists, pro-Palestinian groups, and the European Union.

The village, located not far from Ma’ale Adumim and believed to be home to fewer than 200 Bedouin residents, was approved for demolition in 2018.

Since then, the government led by then-prime minister Benjamin Netanyahu requested a series of delays in the demolition, the last of which came in November 2020 in response to a Regavim petition.

Netanyahu came under fire in the past by right-wing lawmakers — some of whom now serve in the current coalition — for failing to carry out the demolition.

The state says the structures, mostly makeshift shacks and tents, were built without permits and pose a threat to the village’s residents because of their proximity to a highway.

Khan al-Ahmar’s Palestinian residents, members of the Jahalin tribe, say they arrived in the area in the 1950s after being displaced during the 1948 war. They recount practicing a nomadic lifestyle for years before putting down a permanent settlement.

The hamlet’s first structures appear in aerial photographs in the late 1970s. By the end of the 1980s, the tiny community’s presence in the area was recorded in contemporaneous academic accounts.

The camp slowly grew until the 1990s, when it seemed to expand much more rapidly. The community today remains small, numbering less than 200 residents. 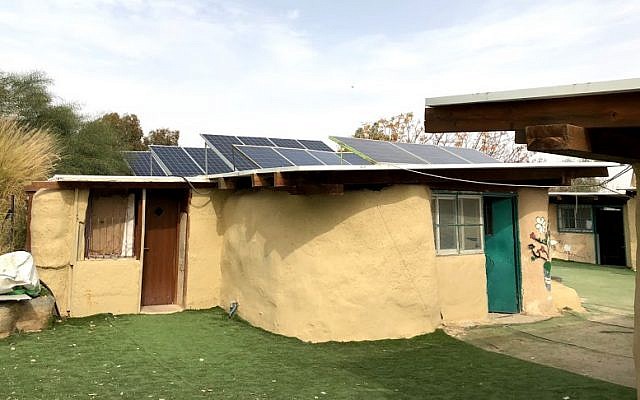 One of the ‘tire school’ buildings in the Khan al-Ahmar village near the Kfar Adumim settlement on February 7, 2018. (Jacob Magid/Times of Israel)

Right-wing Israeli groups say that the aerial photos are proof that the village was only recently built, weakening their claim to the land. They further claim that the Palestinian Authority deliberately sent the residents there to take over strategic West Bank land.

The villagers argue that they had little alternative but to build without Israeli construction permits, as such permits are almost never issued to Palestinians for building in parts of the West Bank, such as Khan Al-Ahmar, where Israel has full control over civilian affairs.

Once the village is demolished, residents are slated to be transferred several miles east, near the Palestinian town of Abu Dis. The relocation site was hooked up to water, electricity, and sewage, and has a school to replace the current Italian-funded institution, which was constructed from mud-caked tires. These have become a symbol for the village.

I’m proud to cover Israeli arts and culture for The Times of Israel. My beat shows ‘the other side’ of life here, with inspiring artists of all stripes — musicians, painters and writers, chefs and winemakers, filmmakers and screenwriters.

Israelis’ creative spirit somehow thrives despite all the obstacles this tiny nation has faced. I’m privileged to share these fascinating stories with ToI readers and listeners, increasing your awareness of the remarkably vibrant Israeli arts community.

Your support, through The Times of Israel Community, helps us to continue providing surprising, impressive stories like mine to readers around the world. Will you join our Community today?

Fog safe devices being installed in trains, on the other hand, trains being canceled at wholesale rates – Rail Hunt

Kundali Bhagya actress Anjum Fakih ready for Bigg Boss, says ‘I was approached by makers but…’