In the first episode of the latest season of the wildly popular Netflix dating show “Love is Blind,” Alfia told a prospective husband that her Jewish identity was nonnegotiable.

“That’s like a fundamental part of me,” she said. “I’m not super religious by any means, but I am Jewish and I’m proud to be Jewish, and I’m proud to have an Israeli family and I love that.”

The proclamation is a rare one on mainstream US reality TV shows – and touched a nerve with many female Jewish viewers, especially at a time when antisemitism is once again in the headlines.

“I got more praise for it than I ever expected,” Alfia, 29, told The Times of Israel in a recent phone interview from her home in Dallas. “It really broke my heart though… I had so many people just send me paragraphs about how they were very cautious to say the fact that they’re Jewish, so they were just praising me for being so brave and outspoken.”

Before going on the show, Alfia said, she never imagined how much reaction her declaration of her Jewish identity would provoke, “but I’m so glad that I did, and that it’s really the first representation of that that you see on a show like this.” 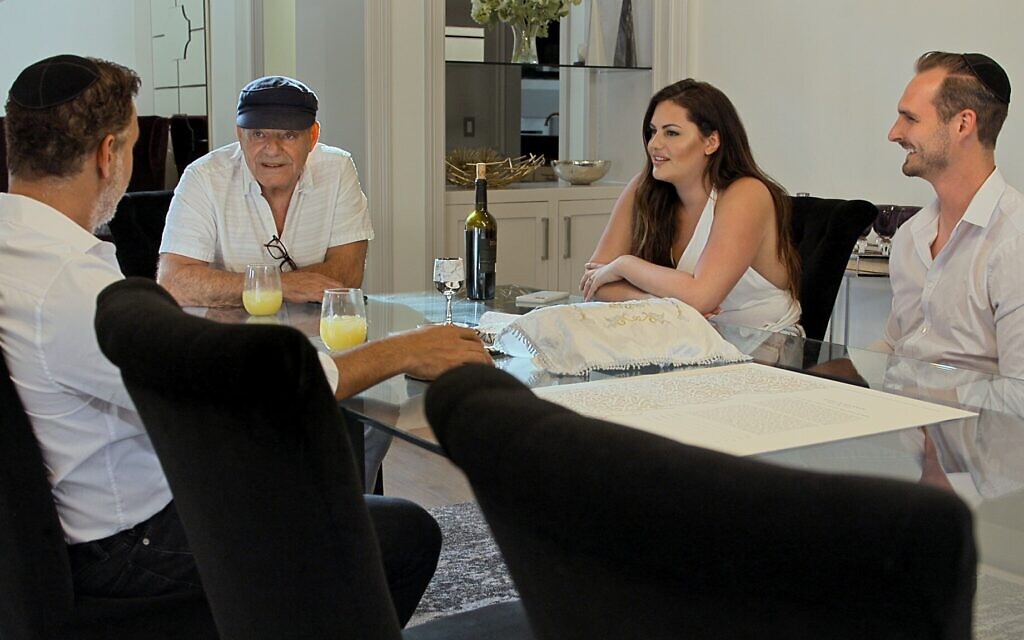 Alexa Alfia and Brennon Lemieux (right) discuss Jewish traditions with her father (left) and grandfather (center) in an episode of ‘Love Is Blind.’ (Courtesy of Netflix)

For Alfia, her unapologetic honesty and sarcastic humor made her a fan favorite – and [spoiler alert] landed her a husband: Brennon Lemieux. The pair got hitched on the show, and 18 months later – after the show finally hit the streaming platform last month – are still happily married.

“I’m actually really thankful that we had so much time to really solidify our relationship before everything coming out,” said Alfia. “Obviously, we did get married very quickly – so it was just like learning all the little things.”

“Love is Blind,” now in its third season, asks the age-old question: Can love transcend physical appearance? At the outset of the show, men and women meet each other for dates on either side of a wall in “pods” – where they can hear but not see each other. The couples that develop connections express their love – and propose – without ever seeing each other.

After their engagement, the couples finally meet face-to-face, and are expected to say “I do” – or “I don’t” – just four weeks later. 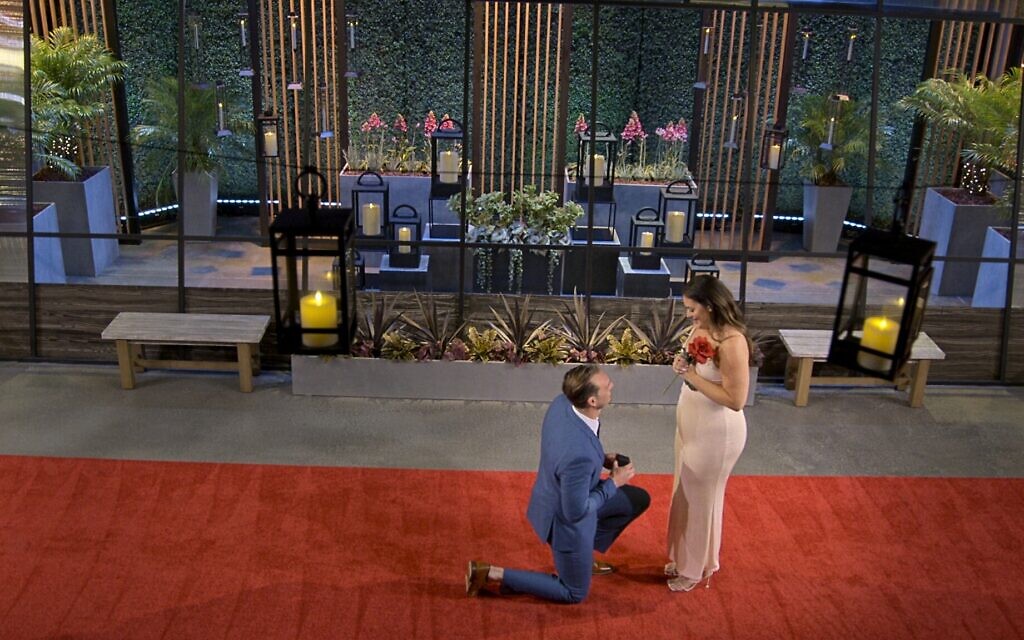 Brennon Lemieux re-proposes to Alexa Alfia when they meet face to face on an episode of ‘Love Is Blind.’ (Courtesy of Netflix)

Alfia – an Israeli-American Jew from a wealthy Dallas family with a penchant for online shopping – and Lemieux, with his deep Texas drawl and self-proclaimed “super redneck” Christian family, did not exactly appear to be a match on paper.

But somehow the unlikely couple formed an undeniable bond very early on. “By day three, I said it’s a waste of my time – and theirs – for me to continue talking to anybody else,” she recalled. “All of our time was really focused on one another.”

In fact, one of the first things the couple bonded over in the “pods” was Lemieux surprising Alfia by saying that one of his favorite things to cook was shakshuka – a dish of eggs baked in tomato sauce that is a very popular Israeli breakfast food.

Alfia, who grew up in Dallas, holds Israeli citizenship and visits the country regularly. She even attended Tel Aviv University, graduating in 2016.

“The majority of my dad’s family lives there, so I’ve been there every single summer since I was born,” she said. “And so it’s something that’s very, very close to me, obviously I lived there and I love it very much.” 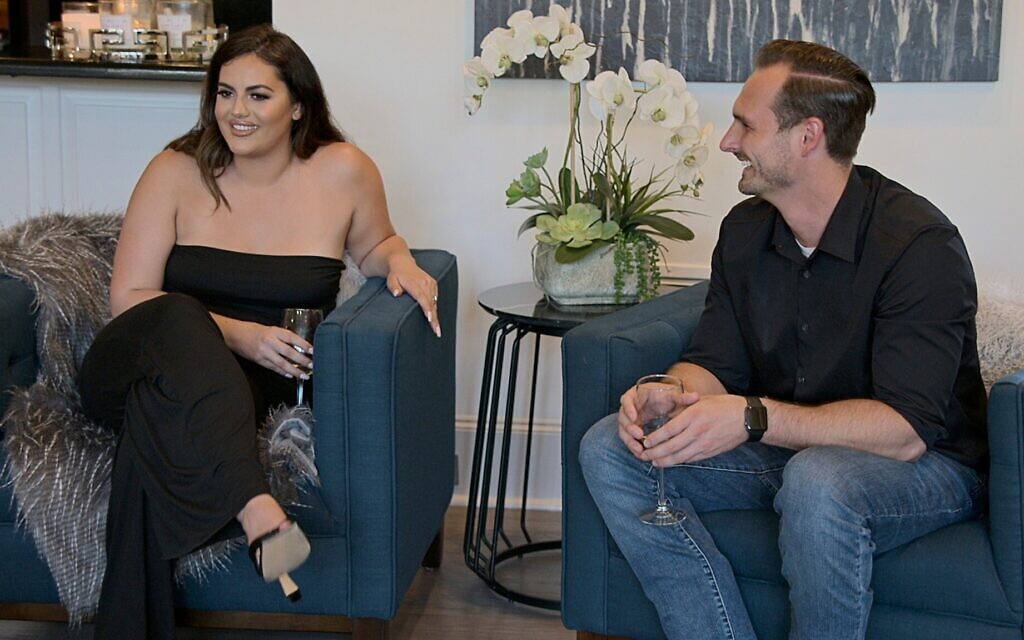 Alexa Alfia and Brennon Lemieux meet her family in an episode of ‘Love Is Blind.’ (Courtesy of Netflix)

Alfia said while she received a lot of support and praise for putting her Jewish identity front and center, she also received a wave of online antisemitism – and even death threats.

“I definitely didn’t really expect it,” she said, noting that while she was subject to occasional antisemitic comments in high school, “I didn’t realize the magnitude” of hate that she would receive on a global scale.

But reading such comments and messages made her feel that “I’m actually even more proud to be Jewish when you send me that kind of stuff. I’m gonna do the opposite of backing down.”

I’m actually even more proud to be Jewish when you send me that kind of stuff. I’m gonna do the opposite of backing down

In one scene after Lemieux meets Alfia’s family, the pair discuss the possibility of him converting to Judaism – something that ultimately did not occur.

“I never asked him to convert… I would never ever, ever ask someone to do something like that for me,” Alfia said. “If he wanted to convert, ‘I’d want you to do it for you,’” she recalled telling him.

“My kids are going to be Jewish, because I’m Jewish, and so it doesn’t necessarily mean that he needs to be Jewish – and that’s something that he was very, very OK with,” she said. Celebrating Jewish holidays “is a very, very precious thing,” she added, “and that’s what our kids are gonna know.”

In a now-infamously famous scene, Alfia’s father, Adam, unrolls a set of knives to jokingly prepare Lemieux for a ritual circumcision, part of the Jewish conversion process.

“I had no idea that happened, and when we got back home [Brennon] was laughing about it,” she recalled. “My dad is a really funny guy, I had no idea that was going to happen, and Brennon thought it was hilarious.” 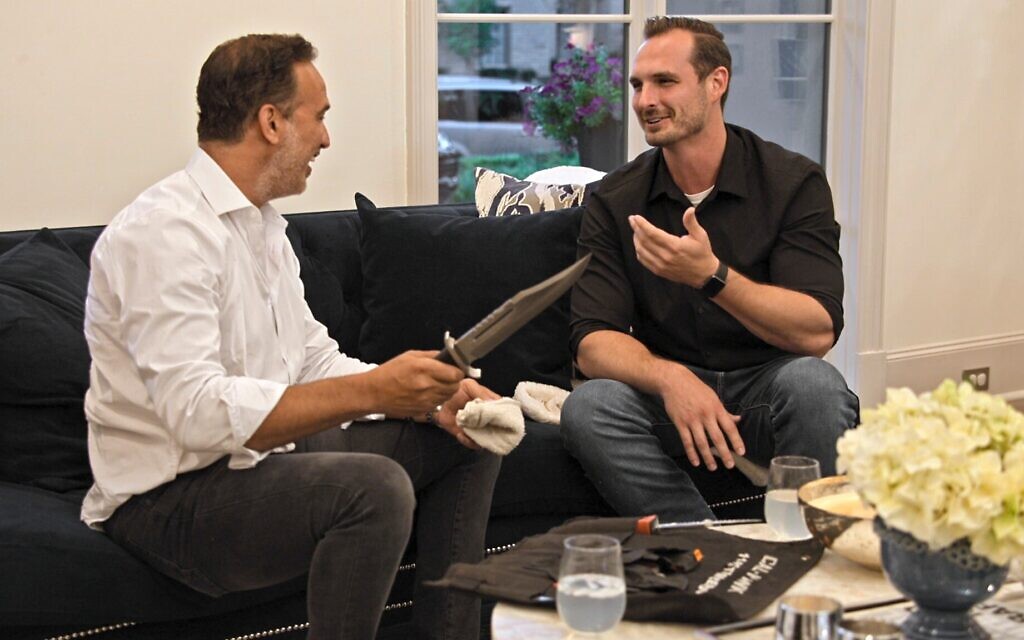 Adam Alfia jokingly shows off his knife collection to Brennon Lemieux when discussing circumcision in an episode of ‘Love Is Blind.’ (Courtesy of Netflix)

And while Lemieux did not end up converting, the couple did hold a Jewish wedding on the show, a first for “Love is Blind” and a rarity on any (non-Israelites) reality TV show. With a rabbi overseeing the proceedings, the couple stood under a A hoodieor canopy, the men wore skullcaps and Lemieux broke a glass at the end of the ceremony.

“We couldn’t have a full-blown Jewish wedding… but I did want some things that are part of a Jewish wedding,” she said. “It was a lot of fun, and Brennon had a really great time and his family had a wonderful time.”

While it was somewhat of a culture shock, his relatives, she said, “were very accepting. They had a lot of questions about it.” While much of it was foreign, “they were more excited than anything, just to learn more about it.”

A year and a half after their wedding, Alfia said, the couple are settling into married life, talking about starting a family and merging their traditions. Alfia said they have a Christmas tree in their home, but she doesn’t see it as a religious symbol.

And with each side celebrating different holidays at different times, “I’m actually really thankful that there are different religions, because then it’s easy just to split between [Lemieux’s parents] all the Christian ones, and then obviously the Jewish ones we go to my family – it actually makes it a lot easier.”

One thing Alfia is eager to share with her new family members is an upcoming trip to Israel.

“In summer 2023 his family wants to go – they’ve never been and it’s always been a bucket list thing, so we’re going to go with them,” she said. “I’m very, very excited for that – to be able to show them everything, Tel Aviv, Jerusalem, the Dead Sea, Eilat – it will be a beautiful thing.”

‘End of an Era’: Final Boeing 747 rolls out of Washington factory, last double decker aircraft in the world