New Delhi: Tejashwi Yadav, Bihar’s Deputy Chief Minister, recently posted a few pictures of him meeting people on Twitter. To this, Former Union Minister Yashwant Sinha replied and asked Yadav to call him as he wanted to speak to him.

In the photos, Bihar’s Deputy CM Tejashwi Yadav was captured listening to people’s issues and giving assurances to solve their issues. Yashwant Sinha replied to Tejashwi’s tweet and wrote, “Would like to spk. Pl call when free want to talk.”

Netizens took this opportunity to poke fun at the former Union Minister. One user wrote, “Uncle, do you also want to become PM material?”

Another user wrote that ‘Yashwant ji is asking for an appointment on Twitter now.’ 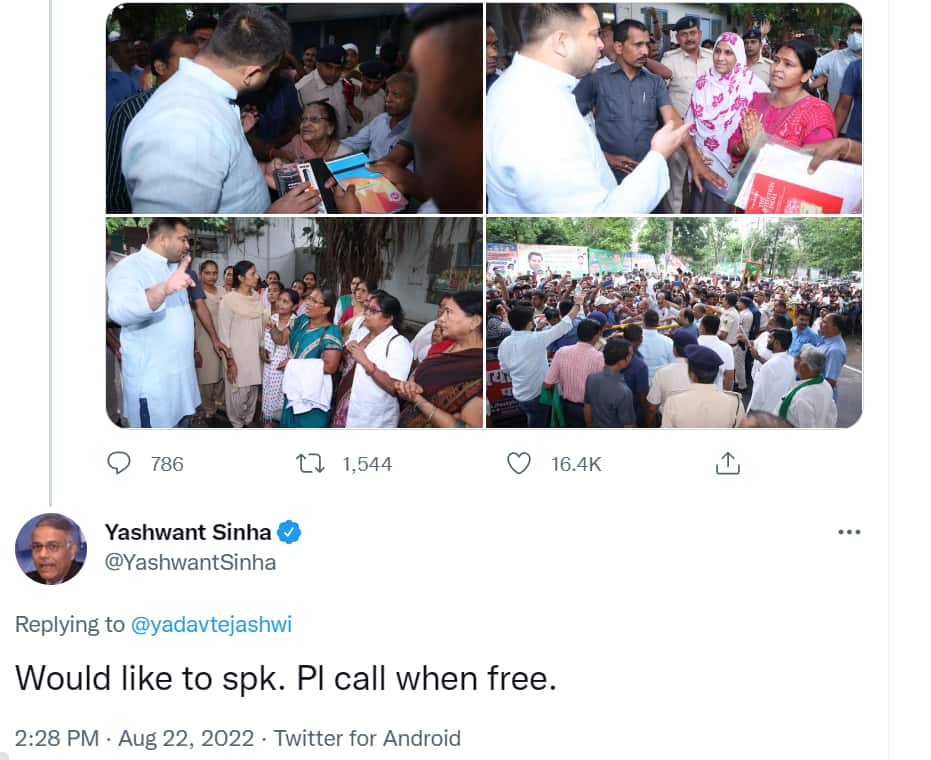 Earlier on Monday, Tejashwi Yadav expressed regret over the incident involving beating up of a protester in the state capital by a senior government official. At a hurriedly convened press conference, he said he has enquired about the episode from the district magistrate of Patna who has assured him that the matter is being probed and action will be taken against the guilty.

Also Read: Tejashwi Yadav expresses regret over protester being beaten up by official

“Such an incident should have never taken place”, said Yadav, referring to the much-televised baton charge by an additional district collector who kept striking a protester with a stick until the latter fell down and was no more able to avert the blows, using as a shield a Tricolour he was holding aloft, which was picked up and taken away by a policeman.

The protester was part of a several-hundred-strong crowd that had gathered in the heart of the city demanding teaching jobs for those who have cleared the eligibility tests.

Students From School set up by President, Participate in 5G live Demo

After Taking On Harsha Bhogle, Ben Stokes’s ‘My Comments Are On English Culture’ Tweet To Bharat Army

Gandhi Jayanti 2022: Performers who brought Gandhi and his ideals to life