The caregiver of an autistic Palestinian man who was shot dead by a police officer who mistook him for a terrorist in Jerusalem’s Old City two years ago has filed a lawsuit against police, claiming the incident caused her mental anguish, according to a Monday report.

Pisces32, was shot and killed while heading to a local special education school. After a policeman mistook a phone in his hand for a gun in the tense and charged Old City, two officers chased him through the streets. They cornered him in a garbage room and an officer opened fire twice, killing Halak as he lay on the ground.

The trial of the officer, 20, who has not been publicly named, began in February. If convicted on charges of reckless manslaughter, he could serve up to 12 years in prison.

In the lawsuit, Abu Hadid claimed that she saw the police officers chasing Halak and shooting at him, as well toward the area where she was standing, Ynet reported.

She claimed that after being interrogated by police, she “felt mental distress, with tremors, difficulty speaking and functioning,” the lawsuit read, according to the report.

“She went through severe mental trauma. She can’t sleep, constantly thinks about what happened, and starts crying and screaming. She panics when she sees a policeman, and at night she makes sure the house door is closed more than 10 times. Abu Hadid was diagnosed as suffering from high-intensity post-traumatic stress disorder, which significantly impairs her functioning and mental wellbeing, and is therefore undergoing treatment,” the lawsuit read.

The parents of Iyad Halak, an autistic Palestinian man who was fatally shot by Israeli police, Khiri, right, and mother Rana, talk during an interview in Jerusalem, June 3, 2020. (Mahmoud Illean/AP)

According to the Justice Ministry, Halak aroused suspicion with unspecified unusual behavior during his walk to work in Jerusalem’s Old City. He was wearing a face mask and black gloves at the time of the incident to prevent the spread of coronavirus.

A police officer monitoring the area for security threats announced that a “terrorist” was in the vicinity, setting off a chase by the officer and his Border Police commander. Halak fled through the streets.

During the pursuit, the two officers called out to Halak in Hebrew and Arabic to stop and identify himself, but the autistic Palestinian man, apparently terrified, continued to run. The commander fired two bullets at Halak’s legs, missing him, according to the Justice Ministry’s Police Internal Investigations Department.

Halak fled to an indoor sanitation facility, where a janitor, a Waqf worker, and Abu Hadid were standing, the Justice Ministry unit said. The two officers followed Halak into the garbage room. One, now the defendant, shot Halak in the lower abdomen, prosecutors said.

More and more police entered the room. Officers at the scene then asked Halak about a gun they believed he may have been carrying.

Halak “got up slightly, pointed at the woman he knew and murmured something,” the indictment said. The officers then directed the question at Abu Hadid. “What gun?” she replied.

While this exchange was taking place, the same police officer shot and killed Halak without any apparent justification, prosecutors said. 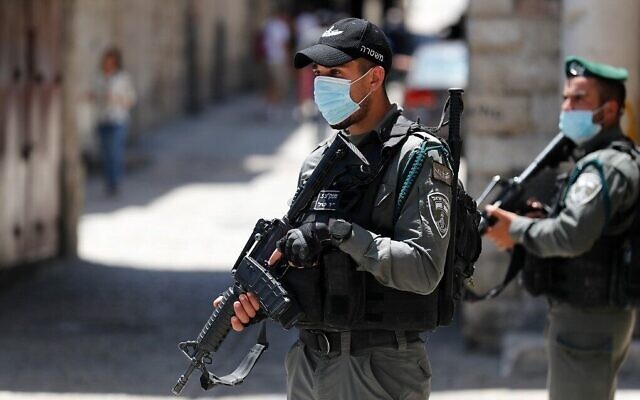 Border Police officers patrol in the area of Jerusalem’s Old City where police shot dead an East Jerusalem man with special needs who they thought was carrying a gun, May 30, 2020. (Ahmad Gharabli/AFP)

“While she was responding, and although Iyad was on the ground, injured as a result of the first gunfire, didn’t have anything in his hands and did not do anything to justify it, the suspect shot him in the upper body, causing his death,” the Justice Ministry statement said.

Abu Hadid described a slightly different scene to Israeli media in the aftermath of the shooting. “I’m with her, I’m with her!” Abu Hadid said Halak cried out on the ground after being shot for the first time.

In an account she gave to the online magazine Local Call, she described pleading for several minutes in the garbage room with police, telling them to check Halak’s identification for proof of his disabled status.

“Suddenly, they fired three bullets at him, in front of my eyes,” Abu Hadid said in an interview with Channel 13 news. “I shouted, ‘Don’t shoot him.’ They didn’t listen, they didn’t want to hear.”

IND A vs NZ A Dream11 Team Prediction: Check Captain, Vice-Captain and Probable XIs for India A vs New Zealand A, 3rd unofficial ODI, September 27