BTS Jin’s latest photos have gone viral on social media. The K-pop star who is all set to carry out his military service in South Korea has treated fans to some sultry snaps from his photoshoot. In the photos, the Korean pop star is seen dressed as a sailor and posing on the ship in the sea. Jin, as usual looks handsome, to say the least. The new posts have prompted ARMY to churn out some of the best pickup lines.

As soon as Kim Seok-jin’s photos were posted on the Instagram page of Big Hit Entertainment, ARMY lined up to flirt a little with the K-pop star. “I would like to be fish to pop up near your boat and observe your beauty,” wrote a fan, another said, “Dear me… when I first saw thus I thought it was photoshop.”

An ARMY was also reminded of Marvel’s Captain America played by Chris Evans. But she thinks=, Jin makes for a better captain. “Who wants captain America when we have captain jin,” the comment reads. Another one reacted to the photo with a flirty comment that said, “Are you traveling at light speed? Cause time always seems to stop when I look at you. Beautiful.” A few others wrote, “searches how to become a boat,” and “searches how to become the island.” 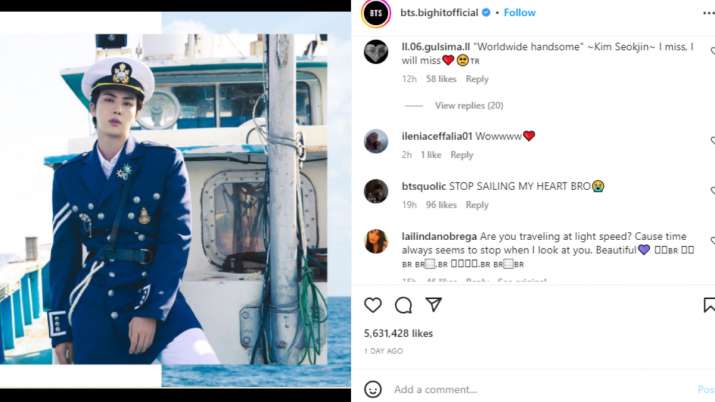 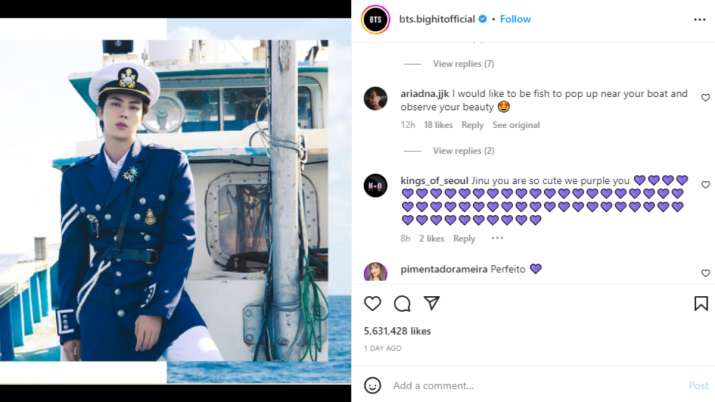 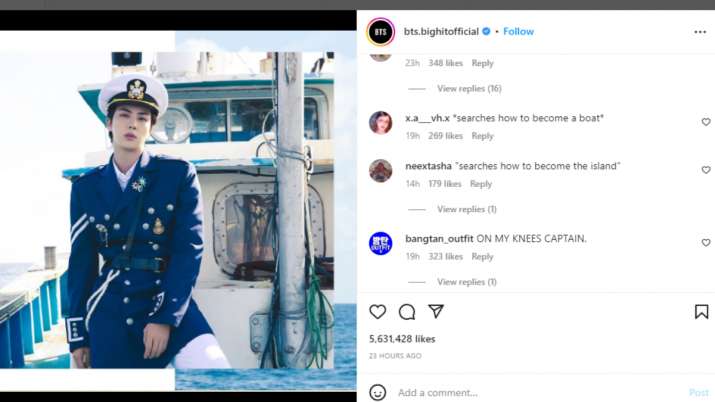 All seven members of the popular South Korean music group BTS are looking forward to carrying out their military service with oldest member Jin initiating the process soon. Jin, who turns 30 in December, will begin the formalities once commitments related to his solo album release are complete.

In South Korea, all able-bodied men are required to serve in the military for about two years. While Jin will conscript before the year ends, according to the company, other members — RM, Suga, J-Hope, Jimin, V and Jungkook — plan to carry out their military service based on their own individual plans.

K-pop sensation BTS, which debuted in 2013, is currently on a break as a unit with each of the members pursuing solo projects. Jin, RM, Suga, J-Hope, Jimin, V and Suga hope to reconvene as a unit around 2025 following their service commitment.

Tamannaah Bhatia is getting married? She introduces her ‘businessman husband’ amid wedding rumours