Tens of millions of people across Pakistan were battling the worst monsoon floods in a decade on Mondaywith countless homes washed away, vital farmland destroyed and the country’s main river threatening to burst its banks.

Pakistani Climate Change Minister Sherry Rehman said a third of the nation was under water, creating a “crisis of unimaginable proportions.”

Officials say 1,136 people have died since June, when the seasonal rains began, but the final toll could be higher as hundreds of villages in the mountainous north have been cut off after flood-swollen rivers washed away roads and bridges.

The annual monsoon is essential for irrigating crops and replenishing lakes and dams across the Indian subcontinent, but it can also bring destruction.

This year’s flooding has affected more than 33 million people — one in seven Pakistanis — according to the National Disaster Management Authority.

“It’s all one big ocean, there’s no dry land to pump the water out,” Rehman said, adding the economic cost would be devastating.

This year’s floods are comparable to those of 2010, the worst on record, when more than 2,000 people died.

Flood victims have taken refuge in makeshift camps that have sprung up across the country, where desperation is setting in.

A family sits under a tent set up next to their demolished house, surrounded by floodwaters, in Sohbatpur, a district of Pakistan’s southwestern Baluchistan province, August 29, 2022. (Zahid Hussain/AP)

The rains stopped more than two days ago, and floods in some areas were receding. But Pakistanis in many parts of the country were still wading through waters that filled their homes or covered their town’s streets as they struggled with how to deal with the damage to homes and businesses.

In one of the worst single incidents of the flooding, at least 11 people were killed Monday when a boat that volunteer rescuers were using to evacuate two dozen people capsized in the flood-swollen waters of the Indus River near the southern city of Bilawal Pur, media reported. An unknown number are still missing from the capsizing.

Rehman and meteorologists said that new monsoons were expected in September. Monsoons have hit earlier and more heavily than usual since the start of summer, officials say — most recently with massive rains last week that affected nearly the entire country.

Pakistan is accustomed to monsoon rains and flooding, Rehman said, but not like this.

The National Disaster Management Authority said floods this summer have also injured 1,636, as well as damaging 1 million homes. At least 498,000 people in the country of 220 million are in relief camps after being displaced, it said. Many more displaced are believed to be living with relatives, friends or outside.

Pakistan is responsible for less than 1% of global carbon emissions, and is currently the country most drastically affected by the catastrophe we are already living through https://t.co/NCxn75PIKj

Pakistani Prime Minister Shehbaz Sharif on Monday said the rains so far have been the heaviest Pakistan has seen in three decades.

“I saw floodwater everywhere, wherever I went in recent days and even today,” Sharif said in the town of Charsadda in the northeast of the country. Some 180,000 people in the town have been evacuated after the Swat River overflowed and swamped nearby communities.

Sharif has said the government would provide housing to all those who lost their homes. 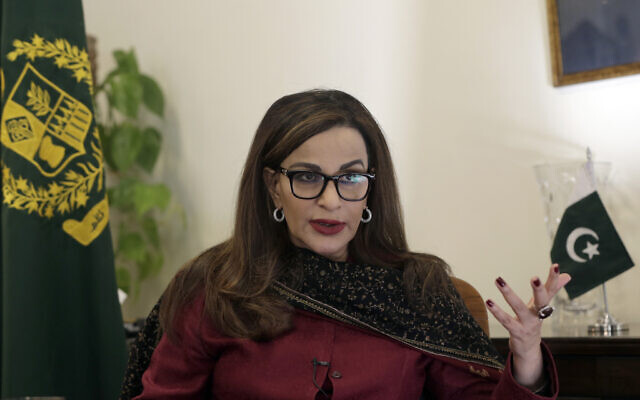 “Living here is miserable. Our self-respect is at stake,” said Fazal e Malik, sheltering in the grounds of a school now home to around 2,500 people in the town of Nowshera in Khyber Pakhtunkhwa province.

“I stink but there is no place to take a shower. There are no fans.”

Many of the displaced have lost not just homes, but also crops and businesses.

Near Sukkur, a city in southern Sindh province and home to an aging colonial-era barrage on the Indus River that is vital to preventing further catastrophe, one farmer lamented the devastation wrought on his rice fields.

Millions of acres of rich farmland have been flooded by weeks of non-stop rain, but now the Indus is threatening to burst its banks as torrents of water course downstream from tributaries in the north.

“Our crop spanned over 5,000 acres on which the best quality rice was sown and is eaten by you and us,” Khalil Ahmed, 70, told AFP.

“All that is finished.”

National emergency declared. Some officials are comparing monsoonal rains this year to 2010 – the worst flood year on record where nearly 20% of the country became submerged. This is impacting over 30,000,000 people right now.pic.twitter.com/VjZVHVEZpm

Much of Sindh is now an endless landscape of water, hampering a massive military-led relief operation.

“There are no landing strips or approaches available… our pilots find it difficult to land,” one senior officer told AFP.

The army’s helicopters were also struggling to pluck people to safety in the north, where soaring mountains and deep valleys make for treacherous flying conditions.

Many rivers in Khyber Pakhtunkhwa province — which boasts some of Pakistan’s best tourist spots — have overflowed, demolishing scores of buildings including a 150-room hotel that crumbled into a raging torrent. 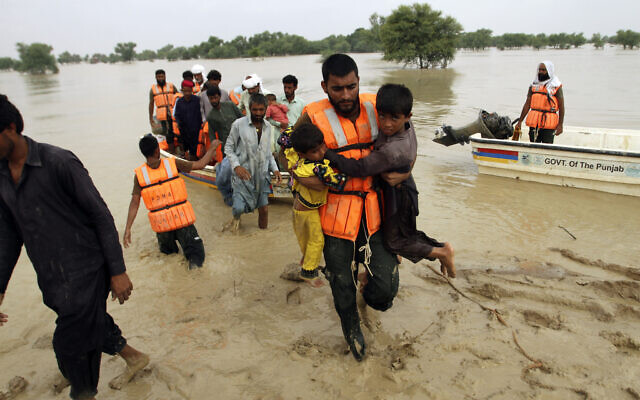 The government has declared an emergency and appealed for international help, and on Sunday the first aid flights began arriving — from Turkey and the UAE.

It could not have come at a worse time for Pakistan, where the economy is in free fall.

In Washington later Monday, the International Monetary Fund executive board approved the revival of a $6 billion loan program essential for the country to service its foreign debt.

“We should now be getting the 7th & 8th tranche of $1.17 billion,” Pakistani Finance Minister Miftah Ismail said on Twitter.

But it is already clear it will take more to repair and rebuild after this monsoon.

Prices of basic goods — particularly onions, tomatoes and chickpeas — are soaring as vendors bemoan a lack of supplies from the flooded breadbasket provinces of Sindh and Punjab. 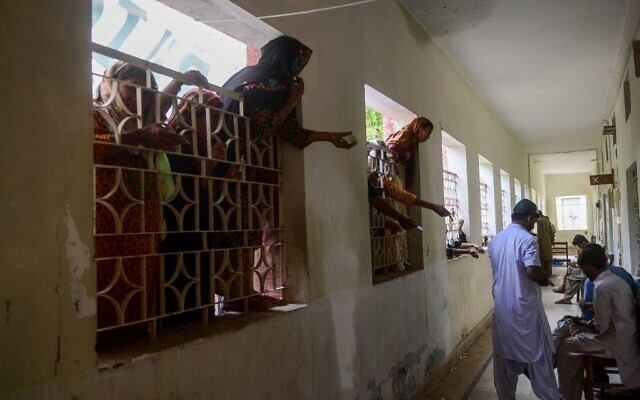 People displaced due to flood hold their national identity cards while they wait to receive twenty-five thousand rupees in cash from government officials as compensation for their damaged houses in Sukkur, Sindh province of Pakistan, on August 29, 2022. (Asif Hassan/AFP)

The meteorological office said the country as a whole had been deluged with twice the usual monsoon rainfall, but Balochistan and Sindh had seen more than four times the average of the last three decades.

Padidan, a small town in Sindh, was drenched by more than 1.2 meters (47 inches) of rain since June, making it the wettest place in Pakistan.

Across Sindh, thousands of displaced people are camped alongside elevated highways and railway tracks — often the only dry spots as far as the eye can see.

More are arriving daily at Sukkur’s city ring road, belongings piled on boats and tractor trollies, looking for shelter until the floodwaters recede. 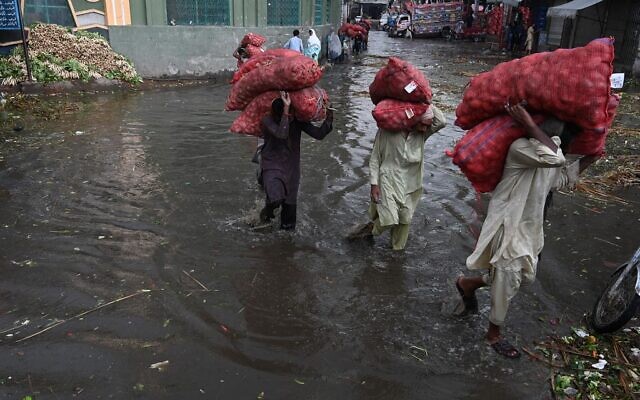 Laborers carry sacks of potatoes as they wade amid a flooded market in Lahore, Pakistan, on August 29, 2022. (Arif Ali/AFP)

Sukkur Barrage supervisor Aziz Soomro said the main headway of water was expected to arrive around September 5, but he was confident the 90-year-old sluice gates would cope.

The barrage diverts water from the Indus into 10,000 kilometers (6,210 miles) of canals that make up one of the world’s biggest irrigation schemes, but the farms it supplies are now mostly under water.

The only bright spark was the latest weather report, with the meteorological office saying there was little chance of rain for the rest of the week.